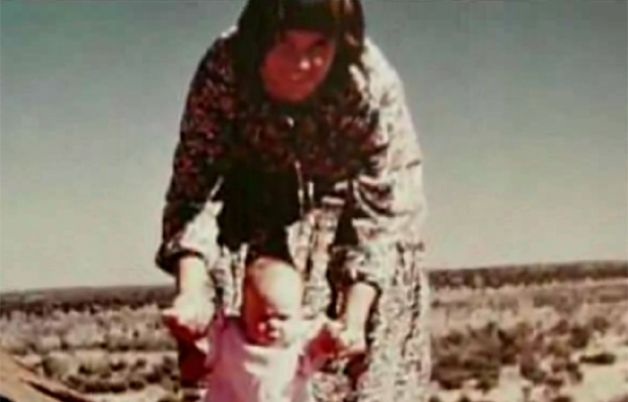 The sad case of missing baby Azaria was once one of the most shocking crime mysteries of all time.

A dingo took my baby!

On 13 August 1980 the Chamberlain family left home in their yellow, hatchback, Torana motorcar for a holiday in Central Australia.

Arriving at Ayers Rock (Uluru), Northern Territory, on Saturday 16 August, Lindy and Michael Chamberlain pitched a tent next to their car at a camp-site.

On Sunday 17 August at about 8 p.m. Azaria was heard to cry out. Her mother went to the tent, found the baby missing and reported seeing a dingo.

Despite extensive searches by Aboriginal trackers and others, on that dark night and later, the baby was never found.

Items of her bloodstained clothing were located on 24 August among boulders near the base of the Rock. 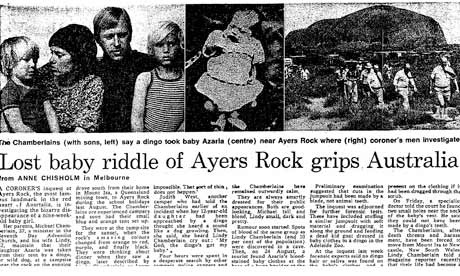 The inquest and trial

Following an inquest at Alice Springs, on 20 February 1981 the coroner Denis Barritt concluded that Azaria had met her death when attacked by a wild dingo as she slept in her family’s tent, and that an unknown person or persons had helped to dispose of the body.

The case was far from closed. In November 1981 the Supreme Court of the Northern Territory quashed the findings of the inquest.

In Darwin a second inquest took place, and it heard new forensic evidence, particularly about bloodstains, that led the coroner Gerard Galvin on 2 February 1982 to commit the parents for trial. Lindy was charged with Azaria’s murder and Michael with having assisted his wife after the crime.

It was reported Lindy Chamberlain showed little emotion during the proceedings.

Found guilty by the jury on 29 October, Lindy was sentenced to imprisonment for life and was confined in Darwin Prison; Michael’s eighteen-month sentence was suspended.

Appeals to the Federal and High courts of Australia failed.

A clue to wait happened!

In early 1986, English tourist David Brett fell to his death from Uluru during an evening climb. Because of the vast size of the rock and the scrubby nature of the surrounding terrain, it was eight days before Brett’s remains were discovered, lying below the bluff where he had lost his footing and in an area full of dingo lairs.

As police searched the area, looking for missing bones that might have been carried off by dingoes, they discovered a small item of clothing. It was quickly identified as the crucial missing piece of evidence from the Chamberlain case, Azaria’s missing matinee jacket

On 7 February 1986, after the discovery of the matinee-jacket, Lindy’s sentence was remitted and she was released from prison pending a further court ruling.

On 2 June 1987 the court ruled there were ‘serious doubts and questions as to the Chamberlains’ guilt’, and considered new evidence to be such that a trial judge would have been obliged to direct a jury to acquit them.

On 15 September 1988 both convictions were quashed. In May 1992 the Northern Territory government announced that an ex gratia payment of $1.3 million would be made as compensation to the parents.