In 2011, in France the entire De Ligonnes family, except for the father, Xavier Dupont de Ligonnes, was murdered in their sleep. Even the two family dogs were killed with what was believed to be a silenced .22 rifle.

After friends and relatives noticed the family had been missing, the police searched their home and discovered all five bodies buried in the backyard. A manhunt immediately started for Xavier, who quickly became the prime suspect. (He had cancelled the lease on their home and informed his children’s school that they were moving and would no longer be attending.)

Although his car was discovered at a nearby hotel, he has never been found. Police believe he most likely committed suicide, but a body was never discovered.

At first, it seemed like a bizarre case of a middle-class family who packed up their home and fled to another continent for a new life. Neighbours of the Dupont de Ligonnès and their four children called the police when they noticed the family home in the north-western city of Nantes seemed unusually deserted. The children’s school had been notified of a “sudden job transfer” to Australia, the family’s wardrobes had been emptied and the letter-box was taped-up with a note “return all mail to sender”.

But when police looked closer at the townhouse – and the suspicious building work on the patio – they found a severed human leg buried in the garden. Further digs revealed a one-legged corpse, and four others: believed to be the bodies of the mother Agnès, 49, and children Arthur, 20, Thomas, 18, Anne, 16, and Benoît, 13. They were thought to have been killed by shotgun, and were wrapped in hessian sacks and buried under quicklime, all recently purchased. With them were the corpses of the family’s two labradors, Leon and Jules. 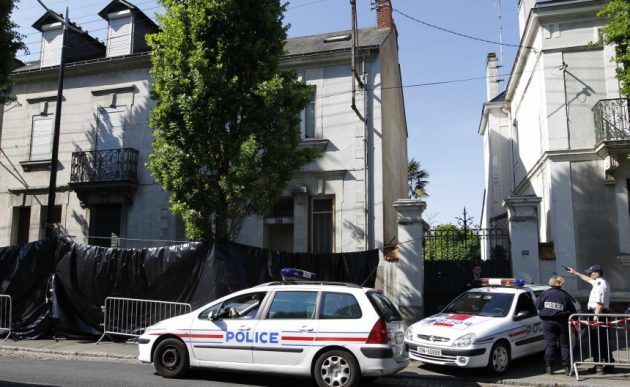 It was discovered Xavier Dupont de Ligonnès bought cement, a shovel and a hoe on April 1, 2011

Xavier buys four bags of lime, 10 kg each, from different shops in the Nantes area on April 2.

On Sunday April 3,  the couple and three of the children dine in a restaurant in Nantes,  then go to the cinema.

This is  the last confirmed  sighting of most the family.

Then on April 4 Anne and Benoît do not turn up at their school, La Perverie-Sacré-Cœur, “due to illness”.

That night Xavier dines alone with his son Thomas at La Croix Cadeau, a high-end restaurant in Avrillé, near Angers. The two waiters remember Thomas feeling unwell near the end of the meal, and that Xavier and Thomas barely spoke to each other during the meal.

Investigators believe that Xavier Dupont de Ligonnès murdered his wife and three of his children on the night of 3 to 4 April, then murdered his son Thomas on the evening of April 4.

On April 13, Neighbours in Nantes become concerned and contact the police. The house’s shutters have been closed for more than a week and Agnès’s car has been parked on the street outside the entire time.

Police searched for the father, Xavier Dupont de Ligonnès, 50, described by neighbours as “courteous and discreet”. His car was found the following Friday in the car park of a cheap hotel on the French Riviera where he is thought to have spent one night in mid-April

The investigation is complicated by the bizarre and contradictory messages seemingly left by the family. Earlier that month, the private Catholic school of the two youngest children received a note saying their father had been “urgently” transferred to Australia for a job. A cheque was enclosed to cover fees for the rest of the year. Xavier Dupont de Ligonnès told another school – where his wife worked as an assistant and taught catechism – that she had been hospitalised for gastroenteritis. But the school then received a letter announcing her resignation.

Europe 1 radio reported that she had told a friend: “Pray for me, I’m going to need it.”

Her car, a black Volkswagen Golf, was found parked near the house, covered in the yellow pollen of spring. Someone had written on the bonnet with their finger: “You had no right. We miss you. PK”

Her husband was thought to work either selling advertising space or running a company dealing with tourist guide listings. He told some people that he was a US secret agent and had to leave under a witness-protection scheme because he had given evidence in a big drug case.

Forensic experts were analysing small brown traces in the house, which could have been blood. There was no sign of a struggle. The bins had been emptied, sheets were folded on beds and in the dishwasher were six plates and sets of cutlery from their last meal. The family had showed no sign of using their phone or internet connections since 3 April.

Dupont de Ligonnes was last seen on April 15, 2011 – a week before his family’s bodies were discovered. Xavier checks out of the hotel but abandons his car there – leaving the hotel in the southeastern town of Roquebrune-sur-Argens on foot with what looked like a rifle case on his back.

30 kilometres (18 miles) from Roquebrune-sur-Argens, Colette Deromme disappears mysteriously from her villa in Lorgues. Both her car and her keys are left behind. Her body is found a month later.

Xavier and Agnès had lived in Lorgues during the 1990s, and two of their children were born there. Investigators explored a potential link between these circumstances but it was concluded that it was a coincidence and that Xavier is not connected to Deromme’s disappearance and death.

In mid-July 2015, a Nantes journalist received the above photograph, with the message on the reverse.

It appears that Dupont de Ligonnès sent what looks like a family photo of two of his sons sitting at a table to a journalist at AFP. On the back of the photo, scrawled in blue ink, were the words “I am still alive”. Just below, in smaller print was, “From then until this hour”. The message was signed: Xavier Dupont de Ligonnès.

The journalist immediately handed the photo over to the police, who have requested handwriting analysis as well as DNA and fingerprint testing.

He also had a secret mistress, it emerged.

Fugitive Xavier Dupont de Ligonnes is thought to have given her £45,000 through a company set up to disguise the payments.

The unnamed woman, from Paris, has shown cops texts and correspondence from the churchgoing executive.

A source close to the murder hunt said: “She has left her home to stay with friends. She is now in fear of her life.” 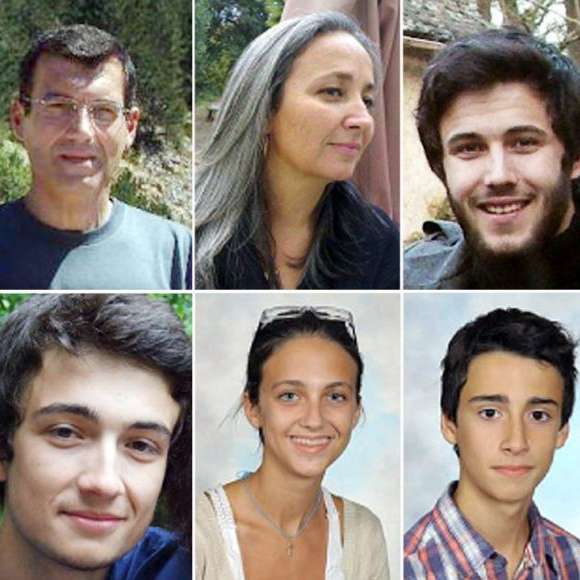 The Missing! and the e-mail

His sister, Christine de Ligonnès mentions an email that her brother wrote to two friends in July 2010. He wrote of “accidents” which may befall his family, and ended with the words:

“So I hope that, even after a police investigation, my parents, brothers and sisters will never be led to believe that I intentionally caused these accidents (even if the evidence is strong).”

Xavier Dupont de Ligonnès created Netsurf Concept LLC, a company which was catalogued onto the commercial register in Florida, USA. His advisor was Gérard Corona, a French expat and manager of the company Strategy Netcom, which was founded in 1998. Corona specialises in assisting foreigners with administrative and legal procedures in the United States.

He also helps his clients to open foreign bank accounts and to obtain anonymous bank cards allowing them to withdraw money anywhere in the world without leaving a trace. It has been theorised that Xavier Dupont de Ligonnès could have used these services in order to disappear.

This statement from the family lawyer stands out as weird, :

We don’t even know when the victims were killed. The autopsy points to a death between 10 and 21 days before their discovery. Such imprecision is truly astonishing. […]

In reality, nothing is certain in this affair, other than the fact that some bodies were found at 55 boulevard Schuman. […] Investigations were carried out, but all that they have allowed us to ascertain is that the bodies share the same DNA. No analysis has compared this common DNA with that of Agnès Hodanger. Furthermore, my client confirms that the bodies’ heights and weights do not correspond to the known dimensions of the family members.

In my opinion, this constitutes negligence during the autopsy. But the autopsy allows Christine and Geneviève to step into the breach.

What I also know is that one man alone cannot dig that hole under the patio, even a man blinded by rage and hatred: 2.5 cubic metres [35 cubic feet] of earth were displaced. The affair is based around the idea that Xavier Dupont killed his family before burying them. No other line of inquiry has been explored. I don’t know who killed this family.

Nothing about their lives helps me understand what could have led them to this situation. That is the conclusion of my clients. Since no one could have killed them, the fact is that they are not dead.