The Papin sisters came from a troubled family in Le Mans. Their mother was Clémence Derré and their father was Gustave Papin. Although rumors were going around town that Clémence was having an affair with her boss, Gustave loved her. In October 1901, when she became pregnant, Gustave married Clémence. Baby Emilia Papin arrived in February 1902. But, Gustave had always wondered if Clémence was still having an affair. He decided he would get a job in another town to take Clémence away from Le Mans.

About 2 years after Emilia was born, Gustave announced that he was taking a new job in a different town. Clémence threatened to commit suicide rather than leave Le Mans, and this only served to strengthen Gustave’s suspicion that she was indeed having an affair. After she regained her senses, the couple moved and started a new life.

The relationship was becoming progressively more volatile; reports indicate that Clémence showed no affection for her children or her husband and that she was an unstable individual. Gustave turned to alcohol. When Emilia was 9 or 10 years old, Clémence sent her to the Bon Pasteur Catholic orphanage. Later, information surfaced that her father had raped her. Emilia Papin later joined the convent and became a nun. However, Clémence had also given birth to two other children, both of which, she and her husband had sent away at an early age.

Christine was the difficult one. She was born in 1905 and was the middle child of the family. Soon after she was born, Christine’s parents gave her to her father’s sister, who was happy to have her. Christine remained with her aunt for seven years, after which she entered a Catholic orphanage. Although Christine wanted to join the convent, her mother would not allow it, and later placed her into employment. With an average intelligence, her personality was stronger and more open than Léa’s. Her employers had reported that she could be insolent at times. Nonetheless, she was a hard worker and was known as a good cook.

Léa was the shy one. Born in 1911, she was the youngest child of three girls. Evaluations indicated that Léa was of slightly lower intelligence than her sister, and she was introverted, quiet, and obedient. From infancy, Léa grew up with her mother’s brother until he died, and then she went into a religious orphanage until she was 15 years of age.

The Lancelin Home at 6 rue Bruyere

Christine and Léa Papin were now of age to work. In 1926, they were fortunate to land a domestic live-in job together in Le Mans in the home of the Lancelin family: a retired lawyer, his wife, Léonie, and their adult daughter, Geneviève. Christine served as the family cook, while Léa cleaned the house.

The Papin sisters were, by most accounts, good girls and model housemaids. Every Sunday they dressed up and attended church, and they had reputations as being diligent workers with proper behavior. Known to be rather unsocial, Christine and Léa preferred their own company over that of others. Each day, they had a two-hour break after lunch, but instead of going out to enjoy the day, they stayed in their bedroom.

By 1933, the Papin sisters had been with the Lancelins for 6 years. Christine was 27 years old and Léa was 21 years old. On February 2 of that year, Mrs. Lancelin and her daughter arrived home around 5:30 to a mostly dark house. It was the second time in a week that the malfunctioning iron caused the electrical fuse to blow while Christine was ironing. Oddly, the iron had just returned that day from the repair man who said he could find nothing wrong with it. When Christine informed Mrs. Lancelin that the iron broke again, the Madame was angry and a dispute broke out.

Of course, there had been other difficulties in the past; Mrs. Lancelin was a real stickler for a job well-done. She would even put on her white gloves to check for dust, regularly gave feedback about Christine’s cooking, and made Léa go back and clean when she missed a spot. But, this time was different.

Crime of the Century

Christine snapped. At the top of the stairs on the first-floor landing, Christine lunged at Geneviève and tore out her eyes with her fingers. Léa quickly joined in the struggle and grabbed Mrs. Lancelin. Christine ordered her to gouge out the Madame’s eyes, then Christine ran downstairs to the kitchen to get a knife and hammer. She proceeded back upstairs where both girls bludgeoned and sliced the mother and daughter. The rabid sisters also used a pewter pitcher that sat on a table at the top of the stairs to bash the heads of the Lancelin ladies. Experts estimate that the incident lasted about 30 minutes. But in the end, the maids had violently slaughtered both women.

Mr. Lancelin and his son-in-law arrived at the home between 6:30 pm and 7:00 pm. The door was bolted from the inside, and the men were unable to enter, although they knew someone was home. The house was completely dark, except for a faint glow coming from the upper level. It seemed highly suspicious, so they went to the police for help. 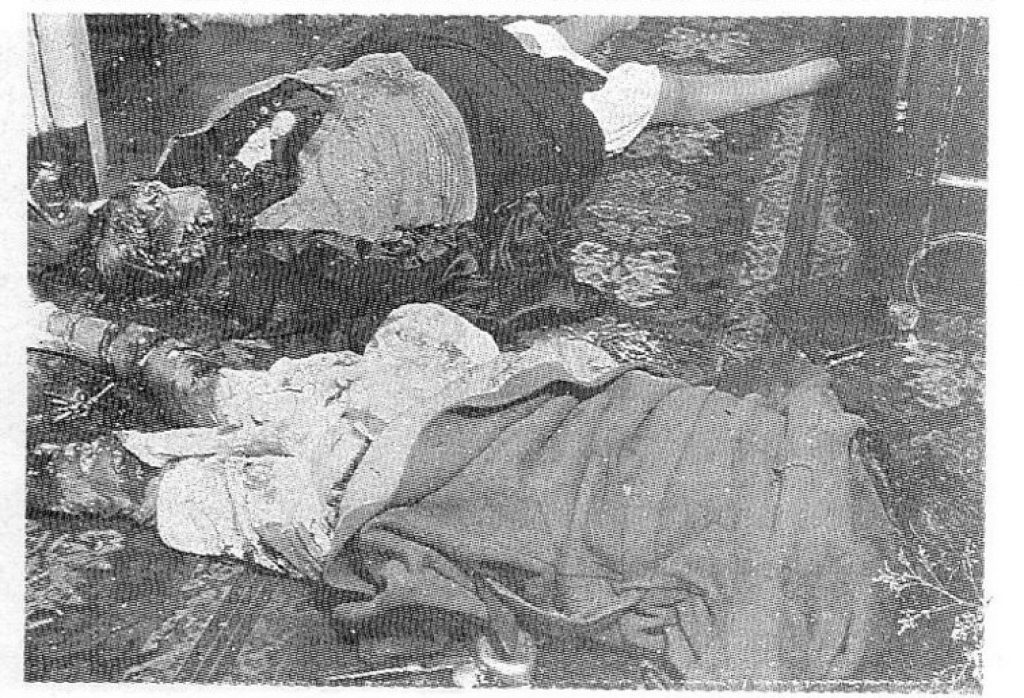 After entering the house, the police climbed the stairs and found a grizzly scene. Most of the injuries were on the faces and heads of the victims. However, the daughter’s legs and buttocks revealed deep knife lacerations. Both women were horribly unrecognizable, as their faces had been completely demolished. Teeth had scattered about the room, and one of Geneviéve’s eyes lay on the top stair. Investigators later found the other eye under her body. Hidden within the folds of the Madame’s neck scarf were both of her eyes. Madame Lancelin was lying on her back with her legs apart and only one shoe on. Geneviève’s body was facing down. Next to her right hip lay a bloody kitchen knife with a dark handle. Blood covered the entire scene and had even splattered the walls two meters above the bodies.

After police discovered the bodies, they searched the rest of the house. In their minds, they all wondered if the killer had done the same thing to the sisters. But when investigators ascended to the upper level where the maids’ room was, the door was locked. A locksmith went to the scene to unlock the door, and when the police proceeded to open it, they found the girls in bed together with their robes on (some sources say they were nude). Next to the bed on a chair lay the bloody hammer with bits of hair stuck to it. Police asked them what happened, and the sisters immediately confessed to the crime.

According to Frédéric Chauvaud, author of The Fearful Crime of the Sisters Papin, investigators initially found the victims with their skirts up and their underwear pulled down. During this time in France, it was highly improper to take photos with genitalia exposed, so investigators (perhaps journalists) pulled the ladies’ skirts down to cover their private parts before police finished the investigation.

The police arrested the sisters and they took them into custody. Christine became distressed and exhibited desperate fits when the police separated the girls. Eventually, the authorities allowed a meeting between the sisters, and reportedly, Christine behaved and spoke in a way that implied a sexual relationship.