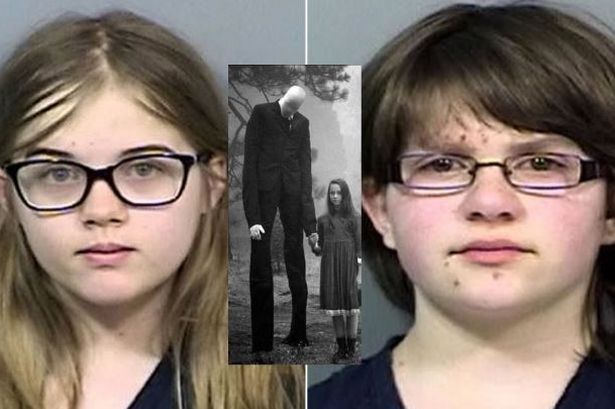 Two 12 year old Wisconsin girls stab their friend almost to death in the woods to please the mythological creature known as Slender Man.

Morgan Geiser and Anissa Weier lured a “Friend” into a Waukesha park on Saturday morning where they proceeded to stab her 19 times prosecutors say. They claimed they did it to join the “cult” of Slender Man and work as his “proxies”.

If you didn’t know already, Slender Man is an internet meme that was created in 2009 for a paranormal Photoshop contest. He is depicted as a very tall, lanky, and pale faceless being who sports a suit and supposedly creeps around wooded areas stalking then stealing children.

They say that they first learned of him on CreepyPasta Wiki, a website that features short fictional horror stories and photos.

Morgan and Anissa had planned a weekend sleepover and invited their victim to use as “bait”. Apparently, this murder was something that was planned by the girls last December. After the brutal act, it was their intention to run off into the woods and find Slender Man’s mansion in the Nicolet National Forest, the girls confessed to a detective.

One of the girls also claimed that she had been having dreams about this mythological demon-like creature who can read her thoughts and also teleport.

The victim was brought into the forest by the two girls under the false pretenses of playing a game of hide-and-seek. Only the game ended with the victim being held down by the girls then stabbing her 19 times in the arms, legs, and torso.

They left her in the woods to die but she was able to crawl away towards the road where she was discovered by a cyclist at about 9:30 a.m. When police arrived, she gave the names of the girls that attacked her.

She was then rushed to surgery and is now in stable but critical condition.

“It was weird that I didn’t feel remorse,” one of the attackers later told police.

“I recognize their young ages, but it’s still unbelievable,” Court Commissioner Thomas Pieper said during one of the girls’ initial court appearances Monday.

The girls were arrested hours later by a Waukesha County Sheriff’s Deputy. Their bond was set at 500,000 each and they face up to 65 years if convicted.

It’s sad and also terrifying that young people these days are having a harder time differentiating fantasy from reality to the point of being capable of killing someone.