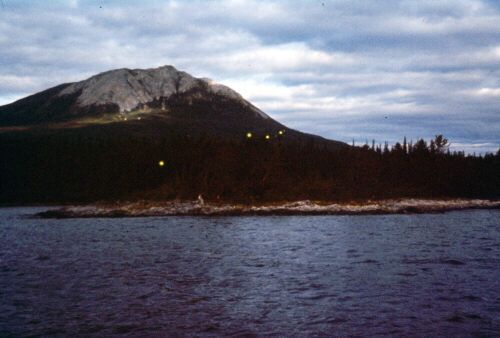 The Spook Light can be found south of Joplin, Missouri, a town now better known as the site of a devastating F5 tornado in 2011.

The anomaly is variously called the Spook Light, Ghost Light, Joplin Ghost Light, Ozark Spook Light, Devil’s Jack-O’-Lantern, Hornet Ghost Light, and others. MANY LEGENDS Like folklore anywhere, the legend of the Spook Light and its origins varies each time its told. Some maintain the light is the torch of a beheaded Quapaw or Osage Indian in search of his lost head. According to another origin tale, the orbs are the spectral remains of the mutual murder of a native man and a white farmer in the woods. Others legends say the light is the ghost of a Confederate soldier or that of a decapitated miner.

Despite an attempt in the 1940s by the U.S. Army Corps of Engineers to study the Spook Light, it’s true origins remain a mystery. Some say the lights are the result of gases emerging from the abundant shales in the area.
Others blame reflected car headlights, though official reports date back to an 1881 publication called Ozark Spook Light, well before motor vehicles began passing through the area.
Luminescence from rotting organic matter has also been fingered, as have UFOs.

While the name and explanations vary, all those who see the Spook Light report it as an orb or several orbs that float on the horizon and can appear to move quite quickly. It is described as being able to change colors from blue to red to gold.

The U.S. Army Corps of Engineers studied the light in 1946, but couldn’t find the source. Explanations range from gas escaping from the abundant shale in the area, to refracted automobile headlights, to UFOs, and ball lightning.

Northwest Missouri State University physics professor David Richardson planned to investigate the Spook Light with colleagues in 2011, but the EF5 tornado that struck nearby Joplin two months before the study put it on hold. “I’ve always been fascinated by ball lightning and if the Joplin Spook Lights failed the first hypothesis (headlights), then I’d have turned to (ball lightning),” Richardson said. “Having a place that regularly produces ball lightning would be awesome to study, if in fact the location produced it.” Ball lightning in nature is, as of yet, unexplained, although it has been created in the laboratory.

Regardless of what causes the light, it’s there. Locals have seen it often, including Hoare. “When I was in high school, and I graduated in 1934, I saw it,” she said. “It came right through the car. We saw it coming toward us and I looked out the back window and I saw it had passed through the car.”