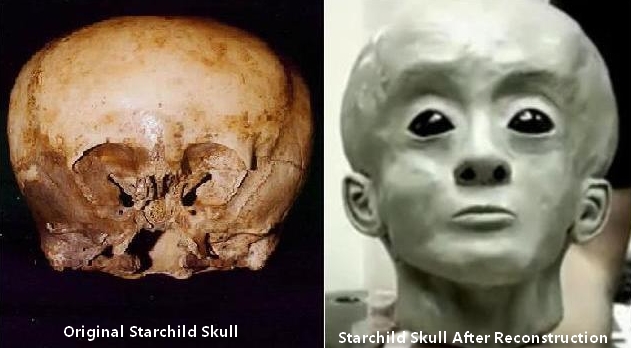 The Starchild skull was discovered in a mine tunnel in southwest Mexico in 1930. Carbon testing estimates the skull is approximately 900 years old. It was found buried, and lying alongside, on top of the ground,was the normal skeleton of a human woman. Pye acquired the skull from Ray and Melanie Young of El Paso, Texas, in 1999 and has since been conducting exhaustive tests to determine its origin.

The Starchild skull differs greatly from human skulls in that it’s much larger and rounder, has oddly-shaped eye sockets, and has a brain capacity which is 200 cubic centimeters larger than a human adult’s. All told, Pye has documented at least 25 major physical differences between the Starchild skull and a normal human skull.

Skeptics claim the skull is that of a youngster born with hydrocephalus, which typically causes an abnormally large head due to the fluid pressure inside the skull bones. And after initial DNA testing in 2003 they were even more adamant that the skull was from a typical human child

However, the 2003 DNA test was performed using mitochondrial DNA, which is inherited exclusively from the mother. Over the centuries that man has walked the planet mitrochondrial DNA has seen very few changes, making it possible to trace the heritage of any human being back to the very beginning of time, so a mother and her child should essentially share the same mitochondrial DNA.

The research revealed that the DNA of the mother belongs to haplogroup C, when traced back through time. People from this DNA group were originally settled in Mongolia, Russia and Australia, and traveled into the Americas by way of the Bering Strait.

The DNA of the Starchild skull shows indications of belonging to haplogroup A, which originated in Africa. Just the fact that the skulls had different mitrochondrial DNA means they were not related and one could assume that the normal female human skull that was found was acting as a guardian for the child, rather than being its mother.

It’s not really any evidence proving that one is human and the other alien, until you stop to consider that this was 900 years ago. How did one “normal” human being and one “abnormal” human being, from two different areas of the world, manage to come together and end up in the same location half a world away?