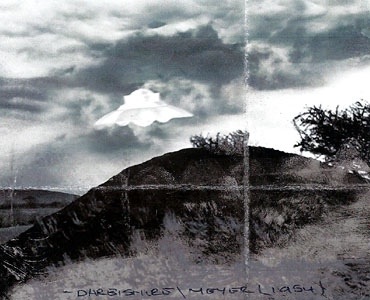 In America the UFO phenomena of the 1950’s was already gaining significant momentum following the publication in 1953 of the book entitled ‘Flying Saucers Have Landed’ by George Adamski.

In 1954 the first major UFO sighting in Britain took place near the village of Torver in the lake District of Cumbria, England. Stephen Darbishire, the 13 year old son of a local resident, and Adrian Meyer, his eight year old cousin went for a walk to a place overlooking the ‘Old man of Coniston (mountain) taking with them a period Kodak box camera. Stephen claims he felt an unusual urge to keep climbing the hill behind his house.

Adrian apparently noticed the UFO first and pointed it out to Stephen who took two, slightly out of focus, photographs. Highly excited by their experience the boys returned home where they were made to write a report for Stephen’s father and draw a sketch of what they’d seen. The picture depicted an Adamski-style scout ship.

The photos were developed and clearly showed an usual craft with portholes and bulbous projections suspended beneath it. Dr. Darbishire notified the newspapers and within days the boys found themselves at the centre of a media storm.

The UFO phenomena had arrived in Britain. Since this event took place there has been considerable debate regarding the incident. For many it was nothing more than a childish hoax that spiraled out of control and gripped the imagination of the nation. For others it is the first official sighting of a modern day UFO in Britain. Stephen certainly became quite famous and was even interviewed by the private secretary of Prince Philip, Duke of Edinburgh.

Overwhelmed by the intensity of events, Stephen later announced that it was all a hoax but was then accused of being part of a government cover up. The media frenzy eventually passed and Stephen went one to have a very successful career as an artist. He is reputedly no longer interested in discussing the subject.