The historical mystery of the lost colony of Roanoke is a well known story – but a lesser known mystery surrounding Roanoke Islands namesake – The Roanoke cave ( or the Jessie James cave) is perhaps even more mysterious.

The cave is located in Roanoke Park in Kansas City, Missouri.

Roanoke park is a 36.04-acre preservation of wooded ravines lined with rugged cliffs, in the heart of an area filled with picturesque stone homes built into the rugged bluffs. The entrance to a large unexplored cave network, called the Roanoke cave which is claimed to be connected to the famous Jesse James cave,(where Jesse James, the outlaw, reportedly hid away for weeks.)is located within its boundaries.

The cave is located near the old tennis courts and has been mysteriously sealed off with a stone wall. There is very little reference information available online about the history of the cave, its size or when it was first sealed.

According to people that lived in the area in the 1940-1950 timeframe, there were a number of occasions when local children got lost in the cave – often the children remained missing for days.

“For 3 days we searched the caves and tunnels, day and night. Everybody was helping to look for the two boys. Finally, on the eve of the last day, a local man discovered the boys in a small narrow passage. The boys survived, and later revealed what had happened. They claim a very tall man, dressed in black had led them into cave with his light to see treasure – then, once deep into the cave, he vanished, leaving the boys lost, frightened and alone in the dark

Local legends also mention at least 4 other children disappeared without trace prior to this. Locals suggest these first disappearances occurred sometime around 1850-60 and that everyone assumed they had got lost in the cave.

Many of the events from the 1940’s were recorded in the Kansas City Star/Times and locals can still recount them, however these articles have not yet been located and there is no authoritative confirmation that any of these events occurred.

All the articles prior to 1991 are in most cases only accessible via microfiche at the Library or Kansas City Star offices. Without a specific date range, searching microfiche articles is a significant effort. Without the correct dates it’s hard to find the articles.

It is thought that the cave was originally sealed off in 1862 reopened sometime after and sealed again around 1957,

State of Missouri: The State of Missouri – Division of Geology and Land Survey keeps track of caves in the state and does have record that a cave exists in Roanoke Park. However they currently have no information related to the cave other than its physical GPS coordinates.

The Eubank Family: The Eubank family lived in the area back in the 1940-1950s and remembered that the cave was open up until about 1957. Their web page link below describes the area and has some pictures of Roanoke Park and the cave entrance – as well as this quote:

“In my memory, the cave entrance was a narrow verticle crack. It was sealed after a child (or two) were lost in the cave and (I believe) – died.” 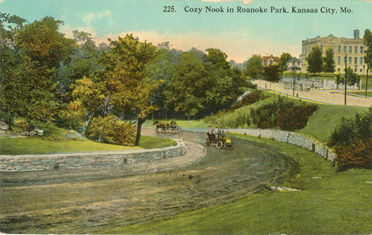 On the back of the postcard above was the sentence:

“He led me into the cave”

No mention was made of the tall dark dressed man