No matter how many books are written or movies are made on supernatural phenomenon, the truth will always be stranger than fiction. Our world is full of mysteries, unexplained, unexplored, and hidden. One such unexplained mystery traces back to a small village in Assam. Located on a ridge, Jatinga is a village situated among mountains and blessed with scenic beauty. Also known as the valley of death, the village has been witnessing a strange occurrence.

As fog descends on the village on a dark moonless night in the monsoon, hundreds of birds fly at high speed towards the ridge, and crash into trees, buildings and the ridge itself. The next morning reveals a ghastly sight of mauled bird carcasses lying strewn all over the valley. The strange phenomenon happens only on dark foggy nights in the monsoon, between 7 p.m. to 10 p.m., in the months from September to November.

The villagers have long held a belief that evil spirits hovering the skies are responsible for driving the birds to suicide. Strangely, it has been observed that the birds are attracted only towards a 1.5 km long strip of the ridge, and not towards the whole ridge. 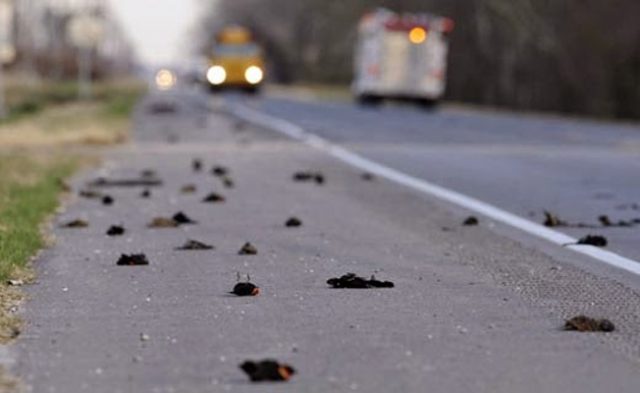 nterestingly, it’s not only the local birds who take part in the mass suicide, many migratory species have also been found dead in the mornings after. So far, a total of 44 species have been recorded to have fallen prey to this phenomenon. Bird species like kingfishers, black drongo, black bittern, tiger bittern, green pigeon, hill patridge, pond heron have all been affected.

The birds are believed to get disoriented and disturbed when flying near the ridge, causing them to plunge to death. They are said to be mysteriously drawn to the light sources put up by villagers, and become too dazed to fly. What is most mind-boggling is that most of these bird species are diurnal and there’s no explanation why they would be flying at night.

his mass suicide has perplexed scientists and locals alike but no one has been able to explain the mystery. Numerous studies have been conducted and various theories have been suggested to explain the mass suicide but nothing concrete has come up so far. Ornithologists who studied this odd behavior of the birds observed that long distance migratory birds didn’t fall prey to mass suicide. During the monsoon, as many water bodies of Assam get flooded, many bird species are forced to migrate to a better habitat. Flying over Jatinga, which experiences high winds and fog during monsoon, is a challenge for the birds who often get disoriented due to the weather conditions.