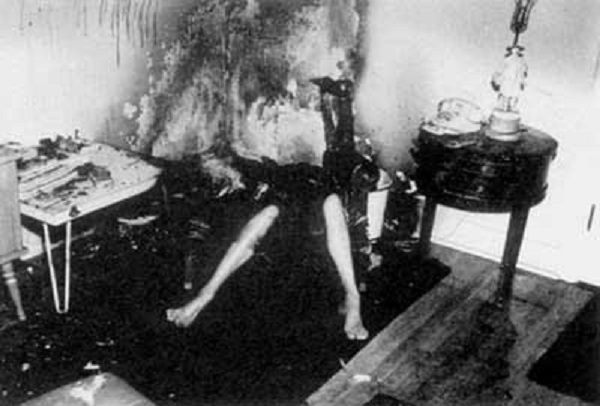 On November 8th, 1964 an elderly and infirm woman, Helen Conway from Upper Darby Township, Pennsylvania was believed by volunteer fireman Robert Meslin and other colleagues to have met her death by the mysterious and extremely freakish phenomena – Spontaneous Human Combustion.

Although Conway was a heavy and careless smoker, by the look of her bedroom, which had many cigarette burns, Meslin said it took only minutes for Conway to burn while sitting in her chair. Like the case of Mary Reeser, it is impossible to be cremated so fiercely from a cigarette burn.

Meslin stated: “The amazing part of the incident in my opinion is the time element.” Meslin went on to say that the grand-daughter made the fire alarm call within “three minutes” of leaving Helen Conway’s house. That meant Mrs Conway was alive at 8:42 AM and the firemen arrived to find her remains at 8:48 AM – taking only 6 minutes. He took the famous picture of Conway’s remains at the top of this post.

Another fireman, Joe Nickell said, “the fire may have begun at the base of the seated body and burned straight upward, fed by the fat in the torso, and may have thus been a much more intense fire – not unlike grease fires that all who cook are familiar with. Indeed, in searching through the dense smoke for the victim, an assistant chief sank his hand “into something greasy” that proved to be the woman’s remains.”*

Fire chief, Paul Haggarty, who had also attended the scene, spoke on camera saying how he believed it must have been SHC. Many put SHC down to The’wick effect’ but this effect would have taken a minimum of 7 hours to consume Mrs Conway.

The only person who can ever know what really happened here was Helen Conway, who has taken this mystery to her grave.