Local legend says 13 witches are buried beneath the nearby Johnston Drive, a stretch of road that runs from Watchung to Scotch Plains.

In 1972 a dog brought home to a local families house a decomposed forearm home. Quickly the dogs owners reported it to the police.

This prompted a major search and a body was soon found atop a cliff in the township of Springfield.

The decomposed body was identified to be that of Jeanette DePalmer, a local 16-year-old who had mysteriously gone missing six weeks earlier.

The local press covered the story, and revealed strange “witchcraft” related facts about the cliff the body was discovered on.

Following the newspaper report, stories began spreading as to the cause of her death.

Police reports state the cliff where she was discovered was covered with occult symbols and many believed her body was placed on a makeshift altar.

Many locals, even some police members, then started to blame a coven of witches, otherwise known as Satanists, who used DePalma for a human sacrifice. 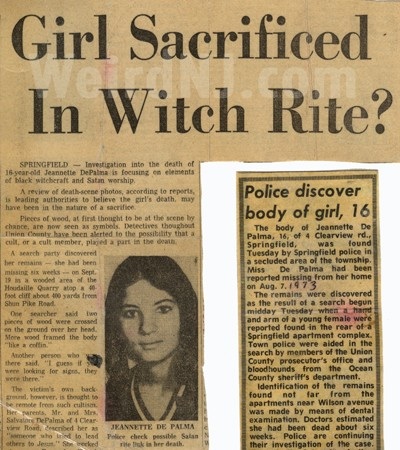 Soon after the discovery, a major flood destroyed much of the evidence, and made the area almost inaccessible.

Strangely, much of the case’s details and reports have since been destroyed, and locals refuse to comment or discuss the case.

What reports do still exist from local papers mention that police couldn’t determine the cause of death due to her badly decomposed body.

They had also investigated a local homeless man who was a prime suspect, only to find no connection with the killing. As for the occult theory, many believe that DePalma may have provoked a group of Satan worshipping teens at her high school when she was trying to evangelize them.

The case still remains unsolved, and no new clues have emerged