Between January 1974 and September 1975, there were 14 murders and three assaults that occurred in San Francisco’s gay community.

In the attacks, the killer met other men at after-hours gay clubs and restaurants in San Fransisco. He usually sketched the men before having sex with them and then stabbed them, thus the name “The Doodler” (also known as “The Black Doodler”). 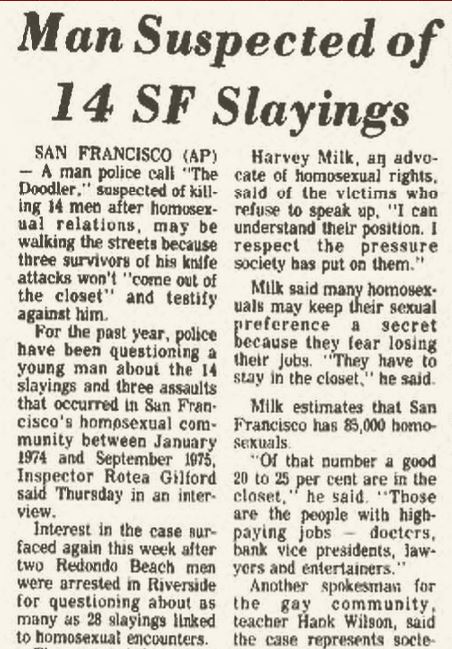 Police believe the man committed the murders after feeling confused over his homosexual experiences.

From 1976 to 1977, police were questioning a certain young man about the murders and attacks. In fact, he was identified by two survivors, yet no arrest was ever made. Mostly because the survivors did not want to go to court.

The survivors being a well-known entertainer, and the other a diplomat. Coming out in the ’70s was not like it is now. People lost jobs over it, and were basically disowned by society.

The suspect talked freely to the police when questioned, but never confessed to the crime. The police also had no evidence to link the suspect other than the survivors. Therefore they were unable to prosecute him.

Strangely the police never released the suspects name to the public.

Five months later, the SFPD released a composite drawing of the suspect(above). He was known, said the police, to “frequent bars and restaurants in the Upper Market and Castro areas.” He was black, between 19 and 22 years old, between 5’10” and 6” tall, slim and frequently wore “a Navy-type watch cap.

“Five victims were drag queens, while six others were into sado-masochism, and the remaining six were upper-middle class business men types.

This originally led authorities to think that the murders may have been committed by three killers, rather than just one.

Many of the victims were mutilated, while some were hacked or stabbed to death. The only similarities were that the murderer drew sketches of his victims and had sex with them before attacking them.

It has to be one person. I think it would just be too much of a coincidence if others would sketch their victims, too.

The fact that The Doodler sketched his victims prior to the attacks could mean he was a local artist. It can also suggest that he liked to have something to remember his victims by, sort of a trophy, if you will.

The Doodlers sketches were never shown in the press.

After all these years, why not release the name of the suspect? Why is there such little information about this case?