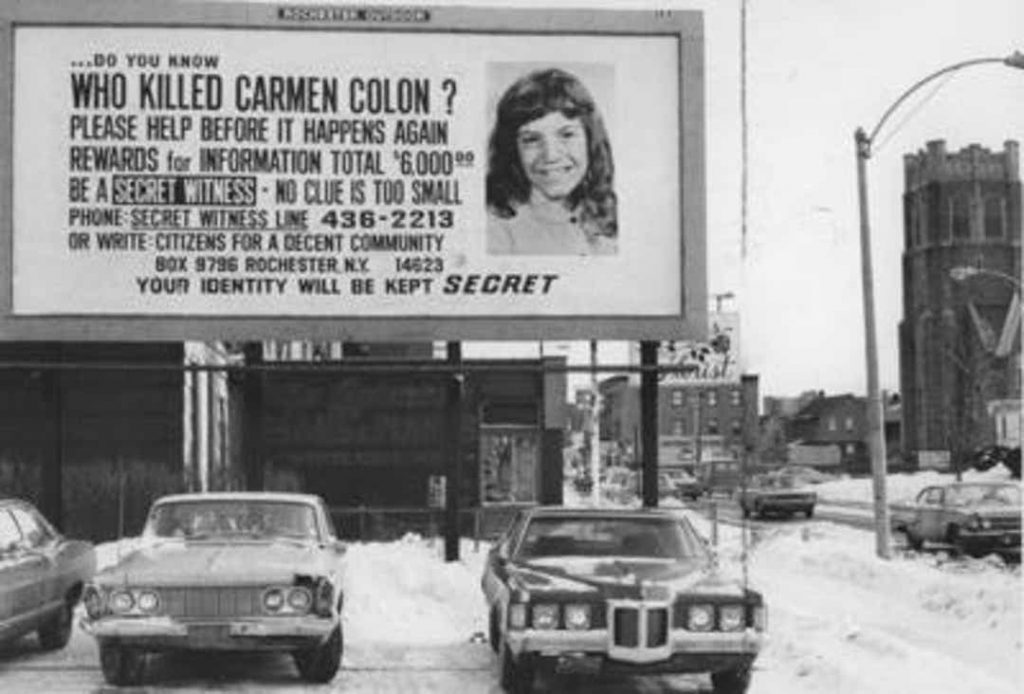 The Alphabet Murders (also known as the Double Initial Murders) are an unsolved series of child murders which occurred between 1971 and 1973 in Rochester, New York

All three victims of the Alphabet Murders were girls aged ten or eleven whose surname began with the same letter as that of her first name.

All three girls first name and surname started with the same letter.

On the 16th of November, 1971, a young girl with dark hair and naked from the waist down was seen by dozens of drivers and commuters on their way out of Rochester. She was running along the breakdown lane of the 1-490 W near the Chili-Riga exit seemingly beckoning for the attention of passers-by as she frantically waved her arms. A car backed slowly towards her from which a man exited and proceeded to grab the clearly frightened girl by the arm and lead her back to the car. He turned back on to the highway and quickened away.

Amazingly thirty-eight people witnessed this horrifying sight however the first report shockingly wasn’t made for a further three days. Tragically by this time, the body of 10-year-old Carmen Colon had been discovered.

Carmen, originally from Puerto Rico before moving to live in one of the poorer areas of Rochester, went missing that afternoon. The young girl had agreed to run an errand for her mother and go pick up her prescription from the local drugstore. Carmen never returned. The last eyewitness report given was of Carmen getting into a car, which appeared to be waiting for her after she left the chemist.

Two days later the half-naked body of the little girl was found in Churchville by the side of the road. A couple of teenage boys made the discovery, initially mistaking Carmen’s body as a mannequin. Carmen had been raped and strangled and her body was covered in scratches. The girls pants were found near the exit to the 1-490.

As police tend to start with looking at family members first, and due to the fact the last eyewitness report seemed to indicate Carmen was willing to get into a car with her killer, police looked long and hard at Miguel Colon. Miguel Colon, or Uncle Miguel as he was known to Carmen, was interviewed by police about Carmen’s disappearance.

Miguel Colon soon after fled to his native Puerto Rico where he would later go on to commit suicide after a domestic violence dispute. In this incident, he non-fatally shot both his wife and his brother in law before shooting himself. Despite fleeing making him look slightly guilty and the violence shown in the domestic incident prior to his death police never tried to indict or charge him with the murder of Carmen.

Police also had an interest in an individual by the name of James Barber. Barber was a known sex offender and was also questioned by police. Nothing became of Barber as a suspect however and he had left Rochester by the time the Double Initial Killer struck again.

At roughly 5:10 pm on April 2, 1973, 11-year-old redhead Wanda went to collect some groceries for her mother from the local store. By 8.00pm that evening Wanda had failed to return home and so her mother desperate with worry called the police to report her daughter missing. Just over 14 hours later Wanda’s mother Joyce got a knock on the door that every parent dreads.

Wanda’s body was discovered by a New York state trooper whilst patrolling the rest area at Irondequoit Bay in Webster. Unlike Carmen, Wanda was still fully clothed but it was clearly evident that she had been the victim of a sexual assault. Her cause of death was strangulation, with the use of a ligature.

One strange detail was revealed during the autopsy. Wanda had eaten custard shortly before her murder. It was felt that the killer must have fed Wanda at some point as it wasn’t an item she purchased from the local store and her mother was adamant this wasn’t a food the young girl would have eaten at home or school.

Police were certainly given plenty of leads to follow up one. They received an anonymous call saying they had witnessed a young girl they could swear was Wanda being bundled into a Dodge Dart. Two young girls also told police that on the on the Saturday before Wanda’s murder that a man attempted to entice them into his vehicle, a Ford LTD. Another caller said he had seen the body actually being dumped. Yet another caller said he saw Wanda crying in a green Pinto driven by a tattoed man. Again though none of these calls led to anyone been arrested for the murder.

After continuously finding themselves heading towards dead ends some optimism finally seemed to appear, in fact, police even went as far as to indicate that an arrest was imminent. Sadly, this wasn’t to be. After interviewing an unknown individual, who had previously been arrested for child endangerment, for 12 hours police released there suspect after they passed a polygraph (lie detector test). Police were back to square one.

Seven months after the murder of Wanda Walkowicz on November 26, 1973, 10-year-old Michelle Maenza went missing on her way home from school. Her battered and beaten body would tragically be discovered two days after her original disappearance in Macedon, New York.

Michelle was again fully clothed but with obvious signs of sexual assault. Like Carmen Colon and Wanda Walkowicz, she had died from strangulation. As was the case with Wanda the autopsy again seemed to reveal that Maenza had been fed by her eventual killer.

Near the time of her disappearance, a friend of Michelle’s told police that she had seen her friend in the passenger seat of a beige car and that the car was driving erratically, even nearly causing an accident. Other witnesses also saw the near collision.

Soon after a man came forward to tell police about an incident he had encountered. He had come across a seemingly broken down beige coloured vehicle near Macedon on the Rt 350, and been of good nature the man decided to pull over and offer to help get the car moving again.

Whilst trying to help the man who stopped to help said that he noticed that the driver was clearly trying to cover his number plate and more importantly the identity of his passenger, who the man thought strongly resembled Michelle Maenza. The driver of the beige vehicle soon became irritated and threatened the good samaritan by raising his fist at him. The witness got back into his car and drove away, but not before taking a note of the part of the license plate he could see.

Another witness gave an identical description of a man seen with a crying girl they were certain was Michelle Maenza. This witness claimed this happened at a fast food restaurant in Penfield. What must have really interested the police was that the meal that was purchased for the crying girl was a cheeseburger, the same meal the autopsy showed Michelle had been fed by her killer.

A Stroke Of Luck

The witness who originally gave the partial number plate returned to the police station several days after his original visit. The man had luckily come across the same beige vehicle he had stopped to help but this time he was able to get a full license number. This led police to an unemployed petty criminal living with his family in Lyons, New York.

The suspect was a good match for sketches given by witnesses. He had also been the owner of the beige sedan witnesses had reported seeing. Despite this, the suspect claimed he had nothing to do with the murders and that he had an alibi.

The man’s alibi was that he was job hunting all day. After checking his account of events telephone records appeared to confirm his story, though it could just as easily been a family member using the phone, and his family also gave him an alibi. Police eventually released the suspect, who has never been named, after he passed a polygraph.

Despite high hopes police again were at a dead end and sadly the trail went cold on the Alphabet Murders not long after.