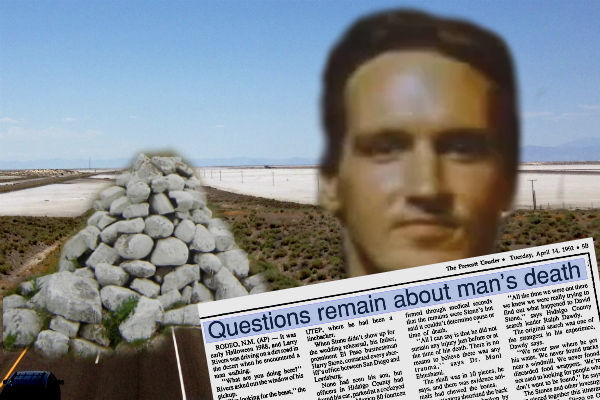 David Stone was a man who appeared to have it all. He was a successful stock market analyst making good money in a stable career, who was big into the New Age movement – a popular subculture in the 1980s – and by all accounts a sane man with a sharp, analytical mind. However, a few days before Halloween of 1988 he left his home when a heated argument with a party guest turned violent, something that those close to Stone say was completely out of character.

David Stone was seen intermittently sitting next to his vehicle on Highway 80, and apparently set off on foot into the desert. He was spotted by witnesses several times that day, including a farmer who found him wandering around on his property ?? noting that he was dressed inappropriately for the cold weather – while muttering something about being ??in search of the beast? before vanishing for good. His car was found on November 5th off the same highway, parked near some pyramid-shaped mountains.

Searchers headed North from the location of the car and found two pyramids fashioned out of rocks and surrounded by a triangle with David??s Rolex watch lying next to one of them. Three miles further north they found a Fibonacci sequence ?? a number pattern used in stock analysis ?? etched into the soil, this one ending in 18 rather than the standard 21. Bloodhounds were able to track David??s scent along Highway 80, 13 miles north from where his car was abandoned but the trail went cold.

His family found a most peculiar note inside his vehicle that read ??”They think the WORD is in the safe. Six knives in Rob??s room. Yous buys your tea and yous take your chances Halloween”. Two hikers found David Stone??s remains in the desert in 1992, four years after he went missing. Despite having no idea what caused his erratic behavior or how and why he died, there was no sign of any foul play.

In February 1992, two hikers discovered David’s remains in the desert near Granite Gap, New Mexico. This is the same area where he left behind several clues before he vanished. Although police have been unable to determine when, how, or why he died, there was no evidence of foul play in his death. While some believe David may have been unlucky enough to encounter drug smugglers who murdered him, as the New Mexico backcountry is a choice location for smuggling and civilians have been murdered to protect shipments, police have chalked up David’s death to dehydration and prolonged exposure to the outdoors, a.k.a. “death by misadventure”.