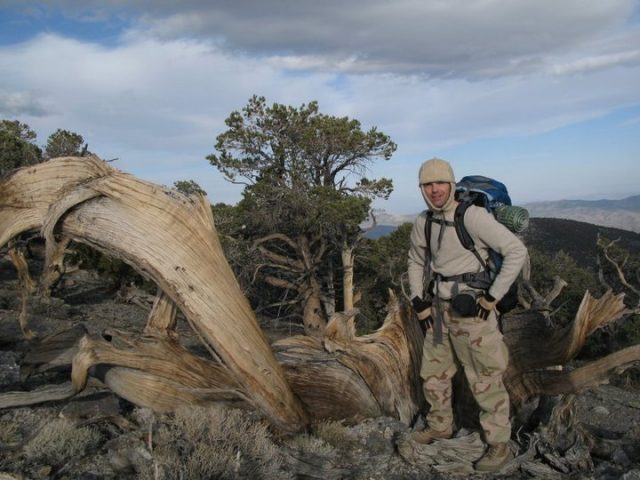 On Monday, November 10, 2014, Kenneth Lee Veach, known by friends and family as Kenny, told his family that he was going on “a short, overnight trip” into the Sheep Mountains in Nevada. The 47-year-old hiker then headed out and never returned home.

Kenny’s disappearance was as unceremonious as his exit, and few concrete clues were ever found. However, the truly bizarre aspects of the story begin not with Kenny’s November 10th hike, but a little over a month earlier. Oddly, it all seems to have began with an off-handed comment on a Youtube video.

Kenny Veach was an experienced solo hiker in the unforgiving Nevada desert who became famous when he disappeared. The video of his last post went viral on You Tube in 2014. He called the treks “soul hikes”, in which he meandered all over the area by Nellis Air Force Base and the place we call Area 51. In this instance, he was hiking just North of Las Vegas, in the Sheep mountains, and discovered this cave whose entrance was shaped like a capital ‘M’. As Kenny got closer to the entrance of the cave, his body began to vibrate. The closer he walked, the more it vibrated. It was at that time he pulled out his only line of defense a knife. As he walked forward, he vibrated, finally becoming so frightened that he ran away from the cave…

Taking his footage, he went home and put the whole thing up on You Tube. Kenny was 47-years-old, and by all accounts was a likeable, decent man, with a passion for hiking. In his video, he is affable and enthusiastic. He was described by a relative as a bit of an “adrenalin junkie”.

From what I read about him it was true. He once picked up a rattlesnake and had to be hospitalized for a week. He did not take much in the way of supplies. He would be gone for days with a chocolate bar and water. He even admitted he put his body through a lot. Once he hiked so long his toenails turned black and fell off.

The area Kenny was hiking around was full of old mine shafts that the military had dumped barrels of chemicals into…..It was about 7 miles from the testing range so it was very isolated. It was a place well known for having drug addicts take up residence in, and a popular dumping ground for murder victims bodies. So, one of his biggest mistakes is that he went alone.

The first You Tube video was received with mixed reviews. Immediately people commented that he was lying about the experience. Others dared him to go back and get more footage. So, he did with a little water, and a rutger 9mm gun. He overlooked the cave in the second video…which got bad comments on his You Tube page, one that suggested that he kill himself. So, Kenny went back again, inviting all who wanted to come with him. No one did.

Kenny was last seen November 10, 2014. He has not been seen since. His phone was found in Sheep mountains on a rock, near a mine shaft. The shaft was searched, but no Kenny. He has not been seen since. So, was Kenny murdered because he stumbled on some secret government project? Did he commit suicide? Or was he just a high-risk hiker than ran out of luck? A few days after Kenny disappeared his girlfriend posted a note on You Tube in the comment section, in which she states she reported him missing and he had not been found. She finished by encouraging all hikers to take GPS with them.

She went on to tell people later that though Kenny seemed in good spirits and up beat that he suffered from depression and refused medication. An interesting side note, is that Kenny’s father committed suicide when he was 20 years old. He said if he ever decided to do that, no one would find his body……..