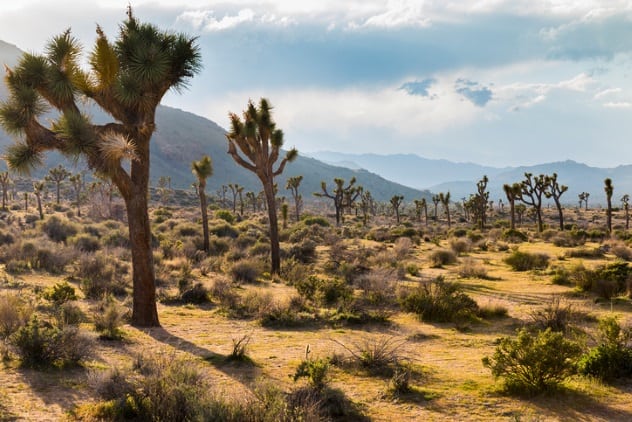 For Mike and Patty Bradbury, Joshua Tree National Park was a haven where they could get away from the rest of the world. On October 18, 1984, as they set up their camp, their three children—Travis, Laura, and Emily—played close by. In a few moments’ time, their annual camping trip turned into a nightmare when Laura vanished. Park rangers, local sheriffs, and volunteers would soon devote countless hours to tracking down the missing three-year-old. Though her family would get some answers over time, the puzzle of what happened to Laura is far from solved.

Police led a three-day search for Laura before coming to the conclusion that she had been kidnapped from the area. Dog teams followed her scent and tracks to a road nearby, and reports would come in of a suspicious man in a blue van. Little else would turn up in the hunt for Laura, despite the efforts of her family and law enforcement. Skull fragments found in 1986 1.6 kilometers (1 mi) from the Indian Cove campsite proved to be Laura’s after a number of DNA tests. Mike believes the skull was brought back to the area, since it was searched two years earlier.

Over the years, Mike took notice of the strange handling of his daughter’s disappearance by some groups and agencies. He wonders why it took a few days before police reported Laura kidnapped. Three people came forward with details on Laura’s abductors in 1985. All three were kidnapped and killed months later. Two of them were found buried near a green sweatshirt just like Laura’s. Police discounted their claims and don’t believe the clothing belonged to Laura, although her father disagrees. He also does not understand how, if the bones found in 1986 were Laura’s, the San Bernadino coroner could not release a death certificate, even in 2010. Mike has hailed the efforts by many to find Laura but has often doubted local law enforcement and their findings.

The toll of her disappearance lingered as time moved on for the Bradburys. Many worried for Travis and Emily, as both struggled growing up in the shadow of their missing sister. Patty would spend years writing letters to her missing daughter before passing away in 2001. Mike, in 2010, wrote a book describing his own hunt for answers in Laura’s case. Thirty-four years after Laura vanished, her abduction is still unsolved, and her family still longs for closure.

In March of 1986, a skull and other remains believed to be that of Laura Bradbury were found by hikers near the park’s west entrance, only five miles from the family’s campsite. In 1990, initial DNA tests suggested that the remains belonged to Laura. However, her family was not certain. In 2010, new DNA testing was done; it confirmed that the remains were hers. No arrests have ever been made and the case remains unsolved.