Twenty years ago a payphone caller claimed dozens of people had committed suicide at a Mediterranean-style villa in the gilded San Diego suburb of Rancho Santa Fe.

“It doesn’t appear that we have any survivors,” Brunk said via radio. “Does anyone have the number for homicide?”

Investigators would count39 corpses — 21 women and 18 men ranging in age from 26 to 72. It was the largest mass suicide ever on U.S. soil.

A strange and shocking discovery

Each was laid out in bed clad in black sweatpants, black button-down tunics and out-of-the-box Nike Decade jogging shoes. Each torso and shorn head was enshrouded by a square of deep purple fabric.

Several details revealed a touch of mirth: Each of the dead had exactly $5.75 in a pocket, and all wore a Trekkie-inspired arm patch that read, “Heaven’s Gate Away Team.” Computers in the mansion flashed a Starship Enterprise-style “Red Alert.” 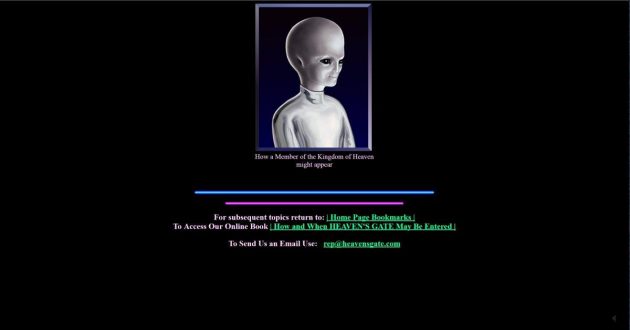 And then it got even weirder.

The Heaven’s Gate cult left video manifestos explaining that disciples were “exiting their human vessels” and beaming up to an extraterrestrial-piloted spaceship zipping along in the blue ion tale of the comet Hale-Bopp, a bright light in the night sky for more than a year.

“The little people I had been looking for had come to take me home,” said one young man, reading from a yellow legal pad. “You can think this is all fantasy … But this is no illusion, and some of you will know it after we go.”

The plan was inspired by the cult’s leader, a bug-eyed wackadoodle named Marshall Applewhite.

A preacher’s son from west Texas, Applewhite led a conventional life — the Army, marriage, two kids, a college teaching job — until, in the midst of a nervous breakdown prompted by a sexual identity crisis, he began fancying himself a prophet.

He found his first acolyte in 1972 while under lock and key in a Houston loony bin. He and Bonnie Lu Nettles, a nurse in his psychiatric unit, became convinced they were the biblical “two witnesses” chosen to serve as the almighty’s earthly emissaries.

They set out on a mission from God, drawing up a dissertation of oddball beliefs while crisscrossing the country in a stolen rental car.

The platonic pair, known as Do and Ti, declared they had been sent from an evolutionary “kingdom level above human” to proselytize to earthlings. They promised that a UFO would one day convey believers to an exalted place.

Do and Ti assembled as many as 200 followers willing to conform to stern prohibitions against sex, alcohol and smoking.

They cultivated androgyny. Men and women wore cropped hairdos and were cocooned in baggy clothing. Applewhite and at least five male adherents proved their fidelity to the cause by undergoing castration.

Heaven’s Gate attracted some media ink and was the subject of two books in the 1970s. Applewhite lowered his profile for a time, but when his partner Nettles died of cancer in 1985, he began preparing in earnest for a doomsday “graduation.” 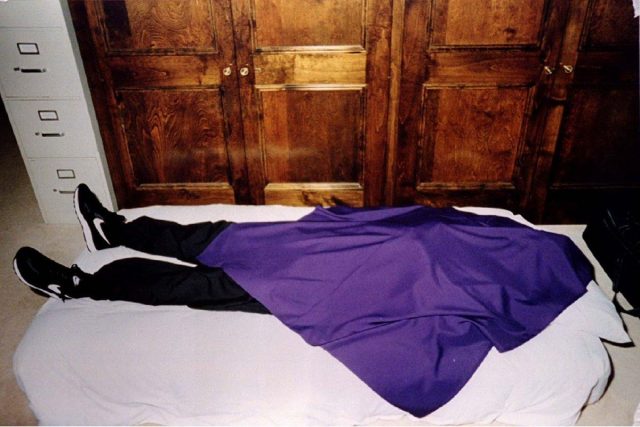 The group reemerged in the early ’90s, bolstered by improved finances after it created a website design firm that thrived in the World Wide Web’s primal era. Members drummed up business by knocking on doors in San Diego’s affluent neighborhoods.

In 1995, Applewhite was captivated by the unexpected discovery of a rocky blob of dirty ice hurtling through the Milky Way.

For 18 months the Hale-Bopp comet put on a glorious show for earthlings. Applewhite informed his star-crossed followers that their ride to outer space had arrived. He rented the Rancho Santa Fe mansion in October 1996 to prepare an exit.

On March 21, 1997, as the comet’s rooster-tail glowed above on the night of its closest approach, Applewhite hosted a last supper of 39 identical meals at Marie Callender’s: turkey pot pie, blueberry cheesecake, iced tea.

The suicides began on March 24. Fifteen people ingested the sedative phenobarbital (dissolved in apple juice) and a vodka chaser, with Applewhite and two female minions stage-managing the tableau of death.

Fifteen more died the next day, followed by nine on March 26. Investigators said the leader was the seventh to die on the third day, followed shortly by the two women. Many of the dead had been tethered to Applewhite’s psychotic leash for 22 years.

The world was alerted by videotapes mailed by the cult to a former member who visited the mansion, then left and called 911.

The tapes, including 90 minutes of Applewhite’s New Age babble and pitiful farewells from disciples trying to justify irrationality, have had 2 million views on YouTube. (Former disciples who missed the spaceship maintain the group’s website, frozen in time from March 1997).

“We’re about to return to whence we came,” he intones to the camera. “I can lead you into that kingdom level above human. That can’t happen unless you leave the human world that you’re in and come and follow me. Time is short. Last chance.”