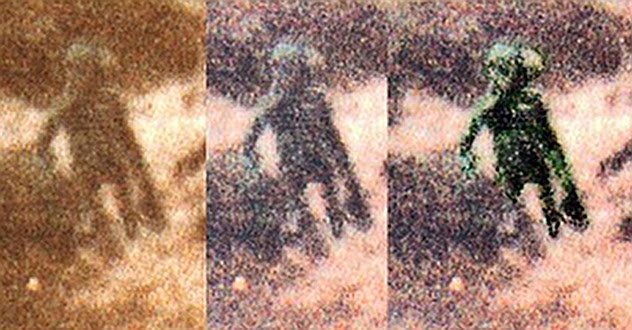 One of the most unique accounts of alien abduction comes to us from the Ilkley Moor in Yorkshire, England. The witness and subject of this case is a former policeman named Philip Spencer. Spencer claims that in the early morning of December 1, 1987, he was taken aboard an unidentified flying craft, and after his release managed to snap a picture of one of the alien beings.

The Ilkley Moor is very much as you would picture it. Reminiscent of the setting of the moors of Baskerville Hall in Conan Doyle’s “Hound of the Baskervilles,” it is an eerie place. It has been said that “The Ilkley Moor can scare you to death during daylight, and at night it’s even worse.”

It is a place of mystery. There is the Swastika stone; boulders etched with strange markings; the Badger Stone; and the Twelve Apostles stone circle.

Many times the only living creatures on the moor are the sheep. Ilkley has other legends too, like the hovering lights at night, which bring occasional reports of UFOs. There are strange, swirling lights that are filtered through the fog and seem to have a mind of their own. Possibly some of the mysterious sights can be attributed to the not too distant Menwith Hill Military Base, or the nearby Leeds Bradford Airport.

The activities of these two facilities will not, however, explain what happened to Spencer. There were also stories of strange creatures that roam across the moor at times.

After four years of being a policeman in another city, Spencer had moved his wife and child to the Yorkshire area to be closer to her family. He was walking across the moor on this December morning heading for his father-in-law’s house and on the way was hoping to get some photographs of the strange light tricks of the moor. To be able to get the images he desired he was using a high ASA rated film to compensate for the poor light in the area.

Unfortunately, the picture that he took was somewhat blurred, but there is no doubt that the creature in the photo is a one of a kind being which basically resembled the small grays.

Along with his camera, Spencer also took a compass to navigate through the fog before sufficient daylight shone through the moor. As he was searching for some photo angles, suddenly he caught the sight of a strange looking being in the slopes ahead of him. He aimed and snapped a picture of the creature which seemed to be gesturing for him to stay away.

It then ran away. Spencer gathered his wits and took off in pursuit of the being. Today he says he doesn’t know why. It was just an impulse reaction. He arrived just in time to get a glimpse of a flying craft with a domed top rise up from the moor and disappear into the sky. Atop the dome was a whitish square. He was not able to get a photograph of the object.

Ilkley Moor Original Photo There was silence now. When he saw nothing else of the being or its craft, he began to walk to the nearest village. This walk took about 30 minutes, and during this time, a couple of things became apparent to him. First of all, his compass now pointed south instead of north, and secondly, the village clock showed the time an hour ahead of his…

Spencer was confused now. Did he see what he thought he saw?

To answer this burning question, he headed by bus to the nearest town with instant film development. Sure enough, he had a picture of the creature! It looked to be about 4 foot tall, and had a blue-green tint to its skin. He knew he had something of importance, or at least, he thought he did. He found the proper channels to contact UFO investigator Peter Hough.

Hough knew what he was hearing was a “too good to be true” case, and it worried him, but after meeting Spencer, he was convinced that he was a man of integrity and was not seeking fame or fortune for his picture. There was no reason to not believe what Spencer had told him. Hough began a thorough investigation. The film with the alien picture would be the first thing to undergo professional scrutiny. 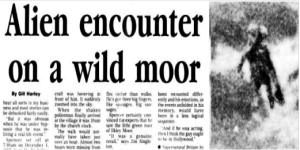 The alien picture was first looked at by a wildlife photography expert. The object in the image was not an animal of any known kind. It could not be determined either way if the figure was animate or static. A reconstruction of the original site did establish the alien’s height at or near 4 and one half feet.

The photograph was next sent to Kodak laboratories in Hemel, Hempstead. An analysis showed that the object was indeed part of the original photo, and not superimposed. This conclusion did not, of course, determine what the creature was.

He stated that the slow film speed used for the low light conditions made the film too grainy for proper testing. “I had great hopes that this case would prove definitive. Sadly circumstances prevent it from being so,” Maccabee stated.

Something strange was noticed in the picture. Appearing on the hill at exactly the spot where Spencer says the UFO was is a white square. Could it be that he had gotten a part of the UFO in the shot unknowingly? He was not sure.