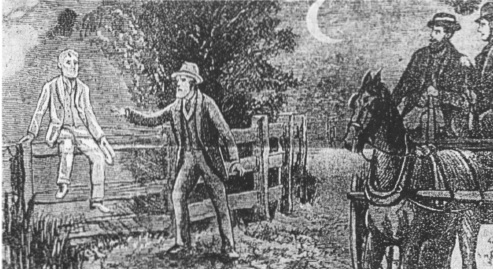 Almost four months after the mysterious disappearance of local farmer, Fred Fisher, in 1826 a strange occurrence took place in a local hotel. On that memorable night, a wealthy and respectable farmer, John Farley, stumbled into a local hotel in a state of shock. John claimed he had seen the ghost of Fred Fisher sitting on the rail of a bridge over a creek. The ghost pointed to a paddock down the creek then faded away.

The body of Fred Fisher was later discovered in the paddock where the ghost had pointed. His brother buried him locally in St Peter´s Graveyard, however no headstone was erected.

Who was Fred Fisher?

Frederick George James Fisher was born in London on 28 August 1792. He worked as a shopkeeper until, either innocently or deliberately, he obtained forged banknotes through his business. On 26 July 1815, Fred was sentenced to 14 years transportation to Australia. In 1822 he applied for a ticket-of-leave and eventually secured a property at Campbelltown.

What happened to Fred Fisher?

In 1825 Fred had an argument with a local carpenter and received a light prison sentence. Worried about his farm, Fred gave his neighbour, George Worrall, power of attorney during his sentence. After his release, on 17 June 1826, Fred Fisher mysteriously disappeared and George Worrall announced that Fred had sailed for England. Three week´s later, George sold Fred´s horse and belongings. Needless to say the townspeople were suspicious!

On 17 September 1826, George Worrall was arrested on suspicion of Fred´s murder. During the trial George confessed – even though the tale of the ghostly sighting could not be told in court, as stories of the supernatural were not permitted in a court of law.

In a strange twist of fate, George Worrall is now buried at one of Australia´s most popular locations overlooking Sydney Harbour at The Rocks.