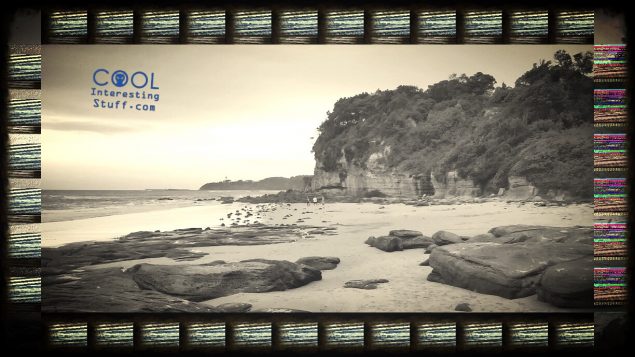 Jenny Dixon Beach is home to one of Australia’s most famous urban legends. A woman appears, arms outstretched, beseeching the help of the observer. A nearby road is home to a phantom hitchhiker, a young woman who was murdered decades ago.

If you are ever driving along Wilfred Barrett Drive, heading towards Noraville in New South Wales, Australia, beware of picking up hitch-hiking women. This area, a narrow piece of land flanked by the trees of the Wyrrabalong National Park, itself flanked by two large bodies of water – the Tasman Sea and Tuggerah Lake, is well known to be haunted.

A pretty young woman may be standing at the side of the road, looking for a lift. You pull over and as you are going in her direction she climbs in. She does not take the front seat, but rather prefers to sit in the back. The conversation, if any, is short lived, her voice trailing off. Before long you realise you are talking to yourself and a quick glance in the rear-view mirror confirms that indeed you are.

Back in the 1970’s (some place it as early as the 50’s) a young woman was making her way home along Wilfred Barrett Drive. It is a long dark walk along the road back to Noraville so she lifted her thumb when she saw a cars headlights coming up behind her. The car stopped and the girl peered inside to see five young men. They looked friendly enough so she hopped on and they set off.

The young men found the woman to be quite attractive and decided they would like to spend some time with her. Against her wishes they drove her down to the local beach where she was sexually assaulted, beaten and left in the nearby scrub.

She was found sometime later. She was not in good shape at all and she did pass away within a few days. Before she died she did state that she would get her own back.

Unfortunately the police were unable to get a clear description of the guilty party, they had their suspicions but nothing definite. The five guilty men went free but the young woman it would seem did get her revenge.

Within the year a series of strange accidents and suicides saw a group of five close friends die in fairly grisly ways – three car wrecks, a hanging and a self inflicted shotgun wound later and the friends were dead. All of them had complained of seeing and hearing things leading up to their demises.

For the past forty years people have reported seeing a young girl at the side of the road, at times she has nearly caused accidents due to people swerving to avoid her, at times people pick her up to have her disappear… It has been reported numerous times, even the police are said to have witnessed this apparition.

Many believe the young woman’s name is Jenny Dixon (due to either misreading stories or mashings of seperate stories), that the beach she had been found was named after her. However the beach had already been named… for another ‘Jenny’ Dixon… and the ghost was named after the beach. The beach is also haunted.