One of the most curious and persistent of all paranormal creatures is Spring Heeled Jack.

The figure’s presence was first noted in September 1837 when he assaulted four separate persons, three of them women, at locations in and around London and was seen again from 1843 through 1845, and in the 1860s, the 1870s, and in 1904 in other parts of England, he was called Spring Heeled Jack or Springald, Springheel Jack.

Reports of his existence date back to the early 19th century in Sheffield, England, and he has been reported on and off in England and the US as recently as 1995. A similar apparition, called “La Viuda,” or “the widow” was reported in Chile in the 1940s and 50s, though he seemed to have been motivated by theft as much as mischief. And while a decent case can be made that the legend of Spring Heeled Jack is nothing more than a series of cruel hoaxes, it would represent a conspiracy of impressive scope and durability. And while his story changes from source to source, it goes something like this… 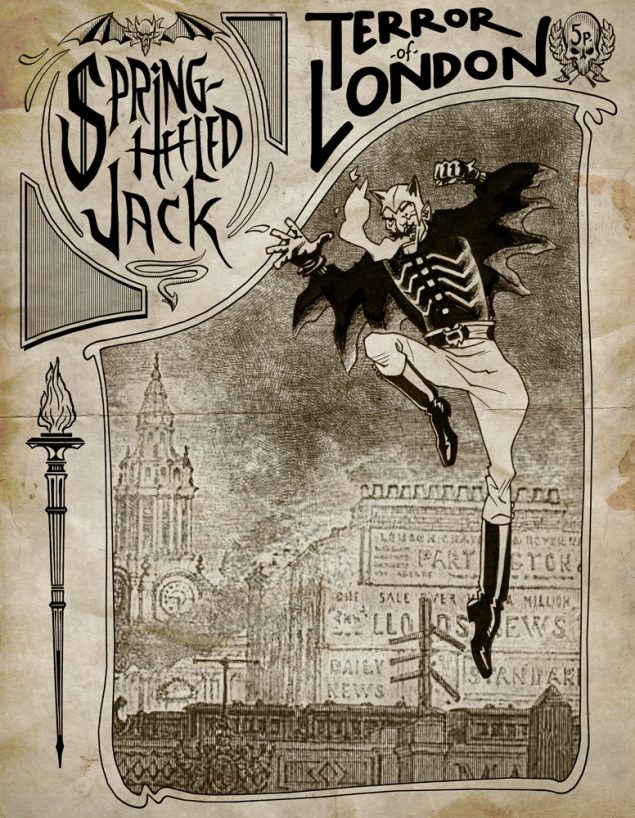 In 1808, a letter to the editor of the Sheffield Times recounted how “Years ago a famous Ghost walked and played many pranks in this historic neighbourhood.” The writer went on to identify this entity as the “Park Ghost or Spring Heeled Jack,” and briefly described its ability to take enormous leaps and frighten random passers-by, but concluded, “he was a human ghost as he ceased to appear when a certain number of men went with guns and sticks to test his skin.”

Spring Heeled Jack would often go underground when the going got too rough, and he often unchivalrously pitted himself against women. In 1837, SHJ appeared to Polly Adams and two other women outside Blackheath Fair. With iron tipped fingers, he tore the blouse off of Adams and scratched her stomach before bounding into the darkness. According to some accounts, Adams described her assailant as “Devil-like,” and according to others, she described him as a “pop-eyed” nobleman-perhaps Henry de la Poer Beresford, Marquis of Waterford. When in 1838, the Lord Mayor, Sir John Cowan publicized this and other assaults, he was besieged by letters by citizens who had suffered similar incidents but were too sheepish to make them public. Vigilante groups were formed to apprehend Jack, but he was quick, could leap over hedgerows and walls, and evaded them easily. After a while, the countryside attacked ended, the matter was dropped, and nobody was prosecuted.

But later that year as Lucy Scales (or “Squires”) and her sister walked home on a London street, Jack jumped out of the shadows and spat blue flames in her face, temporarily blinding her, then retreated into the darkness. This attack and others were widely reported by the press, so when Jane Alsop heard a knock at the door and the words, “I’m a police officer-for God’s sake, bring me a light, for we have caught Spring Heeled Jack in the lane!” she ran outside eager to assist. She handed a candle to the tall, thin man standing at the gate, but though he wore a helmet and cloak like a police officer, when he took the light and drew it toward himself, Alsop could see he was wearing tight white oilskin clothing and had glowing red eyes. He spat blue and white flames at her, then pinning her head under one arm, began to tear at her face, neck, and clothing with his icy claws.

Alsop’s sister, hearing screams, ran outside and dragged Jane into the house. Spring Heeled Jack waited at the door, and knocked several times, then fled when the help the girls called for finally arrived. He easily eluded them, but dropped his cape. It was picked up by an accomplice who also got away. Witnesses reported seeing Jack leaping from rooftop to rooftop, and even climbing a church steeple, throughout the rest of the year. He also tried the same trick he pulled on Jane Alsop, but the servant boy on the other side of the door called out for help and Jack left. 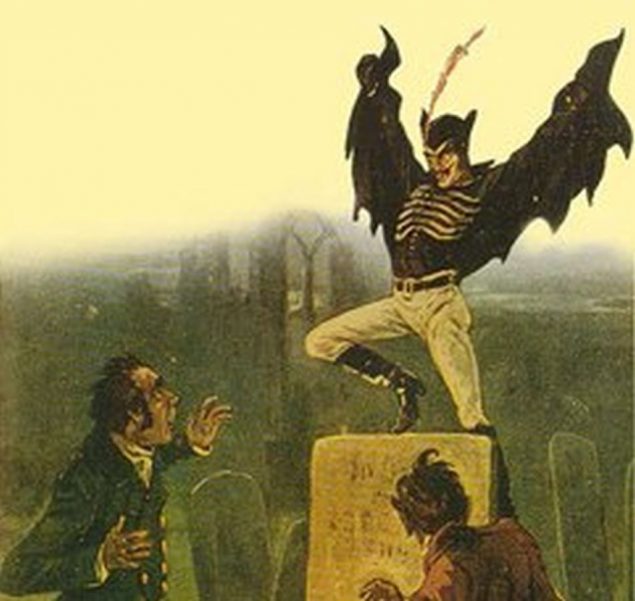 The return of Jack

Then there were no Spring Heeled Jack sightings for an entire year; and for a while after that, they were sporadic and occurred mostly in the country. In 1842, prime suspect Marquis of Waterford married, settled in Ireland, and reportedly led and exemplary life. However, starting in 1843, a wave of Jack attacks occurred all over England, the most serious being the 1845 murder of thirteen year old prostitute Maria Davis.