Tales about Black Eyed Kids litter the Internet, but is the story Legend or Truth? 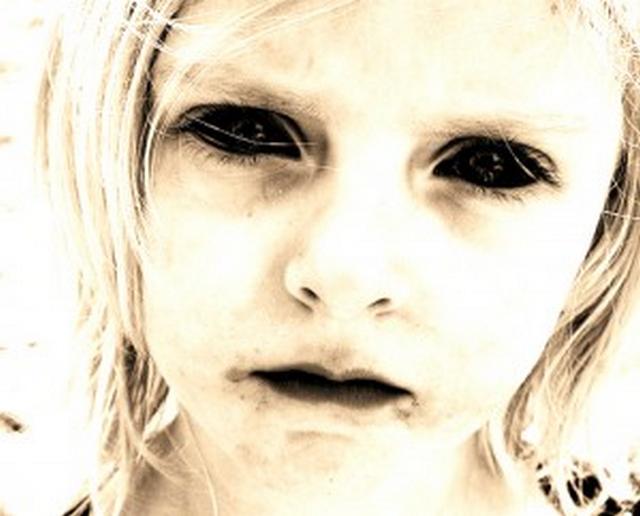 Black-eyed children (or black-eyed kids) are an urban legend of supposed paranormal creatures that resemble children between the ages of 6 and 16, with pale skin and black eyes, who are reportedly seen hitchhiking or panhandling, or are encountered on doorsteps of residential homes. Tales of black-eyed children have appeared in pop culture since the late 1990s

Stories about Black Eyed Kids began to appear in 1988, starting with journalist Brian Bethel reporting of a meeting with two unusually confident and eloquent children who attempted to talk him into giving them a ride in his car. In his story Brethel said that he almost opened the door and let the children in until he noticed that their eyes were completely black, with no iris or pupil. As he says, as soon as children realized he sees something odd, they became angry and insistent, and he drove away quickly. In his posting he implies that this children may have been using some mind control method to induce him to open the door.

Now there have been other reports of similar experiences in other parts of the country. These accounts are similar to Bethel’s in that they generally involve the children’s request for the person to let them inside their car or house, frequently using an excuse such as “I need to get home to my mother,” or something that implies the child is in need.

If we are to trow away at least 70% of the stories found online about these approaches and take that 30% are some of the truth how can we explain it? There are lot of people who would for their own entertainment or write a story of this kind just to make fun of people who are into paranormal stuff. If we are to look logically into these stories about meetings with these children, we get to learn that all of them were asking to be let in, saying that they can’t get in until they are invited. It seems like, all of the people who are reporting about this unusual encounter, have never let the child or children in because of the fear. There for we don’t know what happens if you invite this kind of a child into your home or car. Going down the logical path, you all know that contact lenses of these kind can be found easily, this is not a mission impossible. But, still, stay logic with me, why would a child do something like this? For a laugh? Still this doesn’t sound right to me.

The most bizarre contradiction to the story is the fact that Black Eyed Kids are said to give off a frightening vibe. Those that meet them claim to feel threatened, panicked and even disoriented. Some believe that this could be a result of their black eyes, maybe some sort of hypnotic suggestion used as an attempt to convince the person to let them inside their house or vehicle.

Their persistence to be invited in is a scary one. We must remember that the idea of an evil presence needing some sort of invitation before entering a house (or even a human being) is a longstanding belief in many religions. Choosing a form of a child is a clever one. Because, people would rather say yes to a needy child coming up in the middle of the night on the doorstep than to a man or women.

What these children could be? Vampires, human/alien hybrids, lost souls, demons in disguise? None of these are something you can point a finger on it. Can this be a hoax? Did we get any conclusion? Sadly, no, but we’ll look into this and if you had an encounter with these children let as know…

During one week in September 2014, the British tabloid Daily Star ran three sensationalistic front-page stories about alleged sightings of black-eyed children, connected to the sale of a supposedly haunted pub in Staffordshire. The paper claimed a “shock rise in sightings around the world