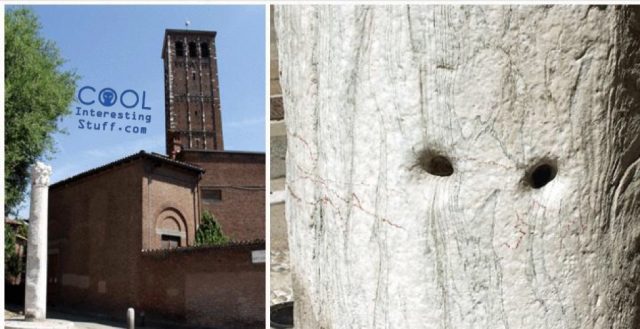 Legend of The Devil’s Column

Located outside the Saint Ambrose church in Milan, Italy. On the left of the basilica’s entrance there’s a single column standing in the middle of a small piazza, in a completely different style than the rest of the buildings in the area. That column is known by the Milanese as the Devil’s Column (Colonna del Diavolo), and is part of one of Milan’s oldest and most beloved legends. The origin of the Column still questionable. It’s not from the Middle Ages, first of all; it’s a Roman ruin, dating back to the second century AD. And while nobody knows much about it.

The story goes, Sant’Ambrogio (Saint Ambrose) (who was not yet saint at the time, but just a simple bishop) was out walking in the garden of the basilica, when the Devil himself appeared. He and Ambrogio had been having issues for a while, you see, what with all the temptations business and the saint being in charge of an entire city in the process of establishing his church.

Ambrogio was kind of a very big deal at the time, so the Devil spent a lot of time trying to corrupt him, which annoyed the bishop to no end. And so Ambrogio, being a practical problem solver, kicked the Devil in the butt and slammed him into the column, where his horns got stuck creating the holes. After trying for a long time to break free, the Devil was able to free himself and frightened, fled. And so, since that day, on the night of Easter’s eve, you can see him on a carriage passing in front of the basilica, dragging the souls of sinners down to Hell. Apparently, the legend is famous enough to attract a small amount of Satanist visitors once holidays come around.

Popular tradition has it that the holes smell of sulfur and placing the ear to the stone you can hear the sounds of Hell. In fact this column was used for the coronation of the German emperors.

According of what Galvano Fiamma said, they swore on the missal, then received the iron crown and embraced this column: “When the King of the Romans want to receive the crown of the Kingdom of Italy in the Basilica Ambrosiana, the Emperor must go first to the marble column that is located at the Basilica of Sant’Ambrogio and a conte of Angera must submit to the Emperor a missal. The Emperor must swear that he will be obedient to the Pope and the Roman Church in things temporal and spiritual. So the Archbishop or abbot of Sant’Ambrogio is crowned with the iron crown as King of Italy.