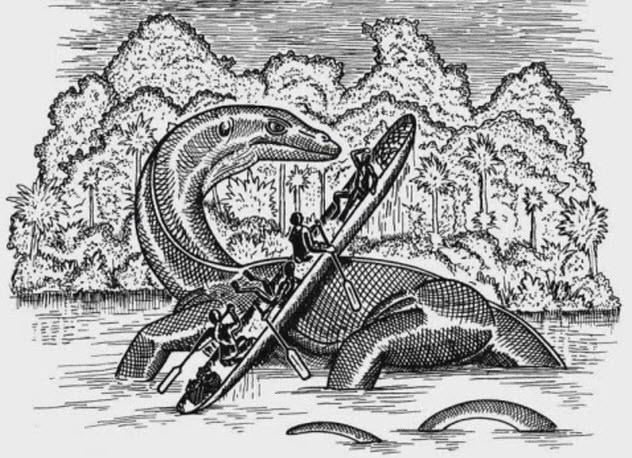 Richard Freeman is one of the more recent explorers to head into Africa in search of one of the continent’s most elusive creatures. According to legend, the ninki-nanka is a massive, crocodile-like reptile. Some of the wildest accounts claim that it can spit fire. However, most people agree that it has a horselike head, ridges (and sometimes wings), and shiny, reflective scales.

Freeman’s team interviewed one man who had supposedly seen the creature. He testified that it was around 45 meters (165 ft) long. After he watched the creature for almost an hour, he took deathly ill. He claimed that a potion from an Islamic holy man had saved him. According to those who believe in the ninki-nanka, there is little documentation of the creature because those who see it die soon afterward.

One witness claimed that a ninki-nanka had stampeded through a pumping station and destroyed equipment before they were able to chase it off by showing the creature its reflection in a mirror. One man saw the creature again and was dead two weeks later.

Freeman, a former zookeeper, is convinced that there’s a rational explanation for these cryptozoological sightings. After all, he suggests that the Loch Ness monster is really a set of sterile eels that are known to grow to massive sizes.

As for the ninki-nanka, he suspects that it might be a form of undocumented monitor lizard. Unfortunately, the major piece of evidence with which he was presented—pieces of the creature’s scales—turned out to be nothing more than rotted pieces of film.