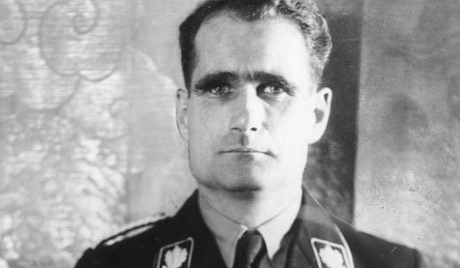 The Strange Life of Rudolf Hess

Rudolf Hess’ life is straight out of a spy novel, filled with bizarre twists and turns before you even to get to the really weird stuff. He was a high-ranking Nazi who carried the title “Deputy to the Fuhrer.” On May 10, 1941, Hess ate dinner at his home in Augsburg, Germany, then hopped into a Messerschmitt Bf 110 and flew to Scotland. He was chased by British planes, crashed, survived and was captured by a farmer. He asked to speak to the Duke of Hamilton and other British officials, claiming he sought a peace agreement between Germany and Britain (he feared the bloodbath of a lengthy war between Germany, Britain and Russia).

It’s not really clear that Hess had the authority to create a peace agreement on his own (Hitler was certainly not in on the deal), and the British simply kept him as a prisoner of war. He spent some time in the Tower of London and other prisons, then was tried at Nuremberg. Found guilty of conspiracy and crimes against peace, Hess was given a life sentence. He spent most of that time at Spandau Prison in Berlin – for the last 20 years of his life, he was the only prisoner in the entire place. When he died in 1987, they tore Spandau down, partly because it was obsolete and unneeded, but partly to prevent it from becoming a shrine for neo-Nazis.

That’s all pretty weird, but there are conspiracy theories galore. The Russians always suspected that Hess was trying to secretly unite Germany and Britain so they could team up against Russia. Churchill and Stalin had some memorable confrontations over the matter. Hess’ mental state declined dramatically once he was imprisoned, despite reports that he seemed mentally fit when he first arrived in Scotland. By the time of the Nuremberg trial, he was suffering from severe amnesia and was periodically unable to remember anything from his years as a Nazi. This resulted in claims that the real Hess was in hiding, and the man tried at Nuremberg and left to rot at Spandau was an impostor