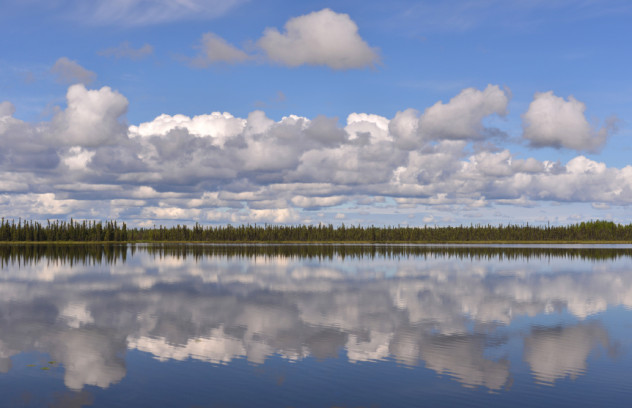 The largest body of fresh water in Alaska, Lake Iliamna is often considered the state’s answer to Loch Ness, with frequent reports of giant creatures lurking in the depths. These creatures have also been sighted in the Kvichak River, which runs from Lake Iliamna to the ocean. The Aleut traditionally avoided fishing in the lake, believing it to be dangerous, while pilots have reported seeing monstrous creatures from the air since the 1940s. The most likely explanation is that the lake hosts a population of white sturgeon, a thick-scaled fish once known to grow up to 6 meters (20 ft) long. (The largest modern sturgeon are usually “only” about half that length.) However, nobody has ever found proof of Lake Iliamna sturgeon, so that remains simply a theory.

More recently, biologist Bruce Wright has suggested that the “monsters” might actually be Pacific sleeper sharks, which can also grow up to 6 meters (20 ft). On the other side of the continent, scientists have documented Greenland sharks navigating the St. Lawrence River. Pacific sleeper sharks are fairly similar to Greenland sharks, suggesting that they might also be able to survive in freshwater. Lake Iliamna is teeming with salmon and other fish, providing an enticing food source for hungry sharks. But, again, no evidence of their presence in the lake has been found, so don’t panic and cancel that Alaskan beach holiday just yet.