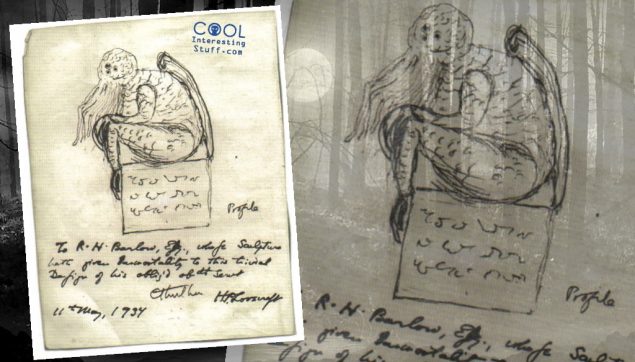 Some myths are born of modern minds. Horror fiction writer H. P. Lovecraft invented one terrifying sea-beast with the somewhat unpronounceable name of Cthulhu (Keh-THOO-loo) in the first half of the twentieth century. The sea monster Cthulhu lived in a jumble of massive stone ruins somewhere in the Pacific Ocean, and his hideous appearance combined a squid-like, tentacled head with a green, dragon’s body and scaled, batlike wings. Cthulhu’s earthly home, wrote Lovecraft in 1928 in “The Call of Cthulhu,” lay in the submerged, “nightmare, corpse-like city of R’lyeh, that was built in measureless eons behind history by the vast, loathsome shapes that seeped down from the dark stars. There lay Cthulhu and his hordes . . .”

These vast, loathsome shapes included other huge, alien beings that ranged from fairly pleasant “Elder Gods” to the evil “Great Ones” or “Ancient Ones” like Cthulhu. The creatures inhabited earth in its early, formative years, when the strange “star-spawn” built giant stone cities that now lie in ruins in the unexplored corners of the earth.

In The Call of Cthulhu, Lovecraft describes Cthulhu as “A monster of vaguely anthropoid outline, but with an octopus-like head whose face was a mass of feelers, a scaly, rubbery-looking body, prodigious claws on hind and fore feet, and long, narrow wings behind.” Cthulhu has been described as a mix between a giant human, an octopus and a dragon, and is depicted as being hundreds of meters tall, with human-looking arms and legs and a pair of rudimentary wings on its back. Cthulhu’s head is depicted as similar to the entirety of a giant octopus, with an unknown number of tentacles surrounding its supposed mouth. Cthulhu is described as being able to change the shape of its body at will, extending and retracting limbs and tentacles as it sees fit.