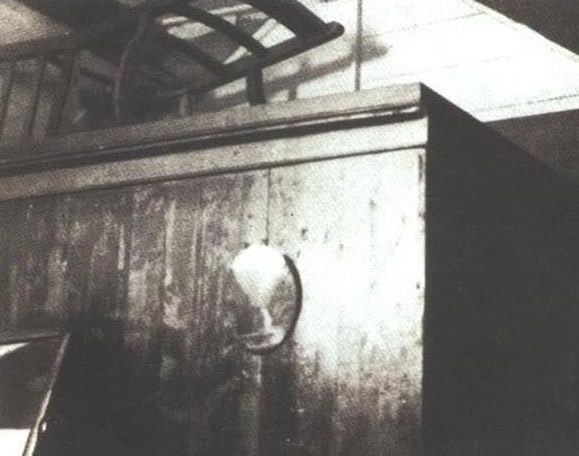 In 1931 on the Isle of Man, James, Margaret and 12-year-old Voirrey Irving got an unexpected guest on their farm. Voirrey saw the creature first–a creature she described as a full-grown rat, with a flat snout and a small yellow face. The family didn’t learn right away that this was no ordinary animal, but an intelligent, speaking creature that could accurately mimic any sound of animal one of the family members suggested for it to imitate. One night when Voirrey was attempting to lull herself to sleep by reciting nursery rhymes, the animal began to repeat them after she had finished. The family was amazed that this animal was able to speak, with its voice clear, distinct, and only a few octaves higher than that of a human’s.

Gef (or “Jef”), as the mongoose-like creature was soon known as, was also a mischievous prankster. Gef would often spit, growl, and blow from the dark corners of the bedrooms. He once even bit Mrs. Irving and drew blood when she reached into a hole in the wall to try to pat him. It was suggested by Voirrey that Gef was also the source of the unexplained scratching the family had been hearing on the roof.

Poltergeist phenomena began occurring at the Irving home after Gef’s arrival, with the furniture and small objects moving on their own. Gef also liked to bring his family (whom he came to address by their proper names) gifts: during the course of his stay, more than 50 rabbits were found strangled to death on the kitchen floor.

Gef also made a very strange claim that he had been born in Dehli, India. He even sang Indian folk songs, and spoke Indian words. As Gef told the Irvings, he was supposedly born on June 7th, 1852–making him 79 years old at the time of his stay at the Irving farm.

“I was brought to England from Egypt by a man named Holland,” Gef said. “When I was in India, I lived with a tall man who wore a green turban on his head. Then I lived with a deformed man, a hunchback.”

Before long investigations were conducted to determine exactly what Gef was. Famous psychical researcher Harry Price sent an associate, Captain Macdonald, to the Irving farm as news stories about the mysterious creature began to pile up.

During his visit, Captain Macdonald tried to coax Gef out of his crack in the wall to pose for a picture. In response to this request, Gef squirted water on the researcher. Clearly Gef wasn’t going to cooperate. In fact, when Harry Price suggested the Irving family–who, aside from Voirrey, only ever caught mere glimpses of the creature–attempt to obtain a tuft of fur from Gef for laboratory analysis, Gef took another opportunity to play a trick on them. He supplied them with a tuft of fur, but under study it was found to be that of a dog, not a mongoose.

Trying a different approach, Price sent the Irvings four Plasticine blocks for Gef to stamp his pawprints into. The blocks were left in Gef’s hole in the wall, and the next morning Gef announced that, though making impressions in the Plasticine was “hard as hell,” he had done it. The blocks were sent off for analysis, with the Mr. R.I. Peacock of the British Natural History Museum’s zoological department determining that one print might have been made by a dog. However, the rest were of no mammal known to him, unless they belonged to an American raccoon. He stated that the tracks had most certainly not been made by a mongoose.

The Disappearance of Gef

Gef stayed with the Irvings–alternating between displaying a volatile and protective attitude toward the family–for four years. Then, the talking mongoose simply vanished, becoming another of the Isle of Man’s many legends.

In 1936 the Irvings left Cashen’s Gap for the mainland, selling their farm to a Mr. Graham. In 1947 Graham trapped and killed a strange looking animal that seemed to be neither ferret, stoat nor weasel. “It answers to all descriptions,” the puzzled farmer told the local press. Eventually, Graham too left Cashen’s Gap, and the farmhouse was demolished.

In 1970, a reporter from FATE magazine managed to track Voirrey Irving down for an interview. She proved reluctant to discuss her former life with Gef. “Yes, there was a little animal who talked and did all those other things,” she admitted. “He said he was a mongoose and we should call him Gef… But I do wish he had let us alone.”