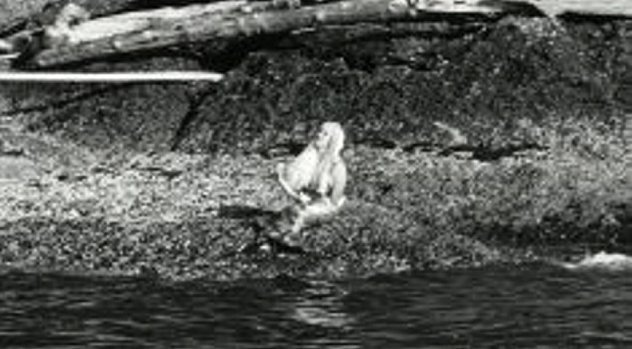 Are Mermaids real? Many people believe they are!

Mermaid Active PassOn June 14, 1967, the Daily Colonist reported that passengers on the B.C. Ferry, the Queen of Saanich, had seen “a long-haired blonde with the lower body of a fish or porpoise” sitting on a rock at the entrance to Active Pass. She was visible for over an hour during which time she ate a silvery salmon. At least two pictures were taken of the “dimpled blonde”.

The next day, the Daily Colonist headline read “$25,000 Offered for Mermaid – This Is…If She is Real.” The Underseas Gardens had offered a $25,000 reward for the mermaid. In addition, the company offered the mermaid herself a contract that included a substantial salary, room and board, and a supply of the special combs that mermaids use.

The idea of mermaids living between the sea and land, luring sailors to the watery depths has fascinated us since ancient times. They represent both the bounty of the ocean, and its dangers.

Southern British Columbia is one of the few places in the world where mermaids have been reported. So last week as I sailed on a BC Ferry, I paid special attention tOrcaso the shoreline at Active Pass, snapping this photo. Sadly, no mermaid graced the shores, so I added one with the magic of Paintshop. Although we didn’t catch a glimpse of the dimpled beauty, we saw a pod of orcas passing through the Strait – always a delight with a mythical allure of their own.

Although many believe that this entire mermaid sighting was a charade, there were still many who believed that what they saw was rea