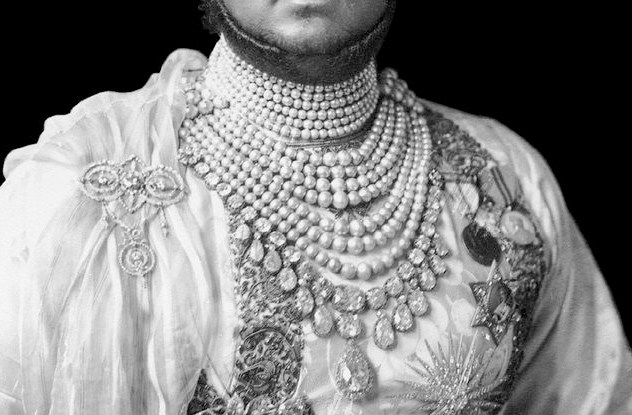 Cool interesting stuff has been on the hunt for missing treasures – and top of the most wanted list is the mysterious Patiala Necklace.

Not long after the formation of De Beers Consolidated Mines Limited in March 1888, a huge light yellow octahedral crystal was found in the De Beers Mine. The gem weighed 428.50 old carats (old carats being the pre-1913 non-metric carat) and measured 47.6 mm through its longest axis and 38.1 mm square. Excluding Victoria, aka the Great White or Jacob, the source of which remains doubtful, the De Beers was the largest diamond found at the four mines at Kimberly during the time period.

After its display in Paris the Maharaja of Patiala bought the De Beer.

The Parisian jewellery workshops of Cartier SA had received a very special delivery: an overflowing trunk of precious stones and jewellery, including the De Beers diamond.

The delivery had been sent from the Maharaja of Patiala, Bhupinder Singh, with a short request from him to “create a ceremonial necklace worthy enough for a King”

The astonishing Patiala Necklace was created by the famous House of Cartier. With three years of intense labour and patience, the iconic Collier de Patiala, or the Patiala Necklace, was presented in 1928.

Being made especially for Bhupinder Singh of Patiala, the astonishing piece was thus named after him.

This gift to the Maharaja Sir Bhupinder Singh had five rows of platinum chains adorned with 2,930 diamonds.

It was encrusted with Burmese rubies among other jewels.

The centerpiece was the seventh-largest diamond in the world, the famed DeBeers Diamond, a 234.6-carat yellow diamond, roughly the size of a golf ball.

The necklace was perhaps the most spectacular and most expensive piece of jewellery ever created and the largest single commission that Cartier has ever executed.

Sorry, how many diamonds?

Yes – It contained 2,930 diamonds, including as its centrepiece, the world’s seventh largest diamond, the “De Beers”, that had a 428 carat pre-cut weigh, and weighed 234.65 carats in its final setting. The piece also contained seven other diamonds ranging from 18 to 73 carats, and a number of Burmese rubies – two rubies weighing 29.58 carats. 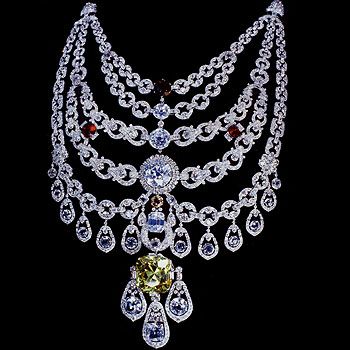 For the next 10 years, from 1928 to his death in 1938 The Maharaja of Patiala would be seen adorning the necklace on many official events. During this time he also became perhaps the most famous Maharaja of Patiala, being best known for his incredible extravagance.

According to an account by Alain Boucheron on his family business in the book “The Master Jewelers” that was cited in the Times:

The flamboyant Maharajah… arrived at Boucheron’s in 1927 accompanied by a retinue of 40 servants all wearing pink turbans, his 20 favorite dancing girls and, most important of all, six caskets filled with 7571 diamonds, 1432 emeralds, sapphires, rubies and pearls of incomparable beauty.”

During his adult life he sired an estimated 88 children of whom at least 53 survived him.

Upon his death the necklace was locked in the Royal Treasury of Patiala. During the next 10 years the necklace was removed for special occasions and ceremonies. A detailed record of this events was recorded by the treasury.

The $125 million necklace sparked controversy, when it discovered to have mysteriously disappeared from the royal treasury of Patiala in April 1948.

The last Person to wear it was Maharaja Yadavindra Singh, son of Maharaja Bhupinder Singh – at a royal banquet.

Reports claim the state fell on hard times and stones from this necklace were dismantled and sold off separately – but this has been denied and no records of any sale are in existence.

50 years later in 1998, Eric Nassbaum, a Cartier representative, stumbled upon the remnants of the necklace in a small antique shop in London. All the big stones were gone, including the De Beers and along with the seven surrounding diamonds.

It was purchased by Cartier whom attempted to restore it to its former glory.

The large jewels are still missing, in particular, the Burmese rubies as well as the 18 to 73 carat stones that were mounted on a pendant.

Cartier who had purchased the incomplete necklace and, after four years, restored it to resemble the original. They replaced the lost diamonds with cubic zirconia and synthetic diamonds, and mounted a replica of the original De Beers diamond.