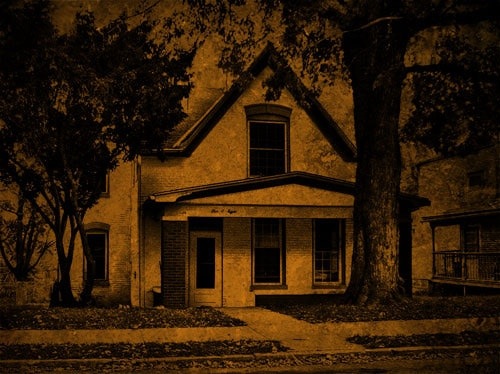 The Sallie House in Atchison, Kansas quickly earned a national reputation as one of the most haunted places in the U.S. — almost certainly the most haunted in the state of Kansas. The rather simple-looking painted brick house at 508 N. Second Street, built between 1867 and 1871, gives no indication from the street of its spooky reputation, but the many experiences of those who lived there are have subsequently investigated the place testify as to its ghostly vibes — mostly of the negative kind.

The house was brought to national attention when Debra and Tony Pickman lived there from 1992 to 1994 and had many distrubing encounters, including physical attacks on Tony, which were documented by the Sightings television show. It’s called the Sallie house because the daughter of some previous tenents had an imaginary friend named Sallie, and she is beleived to be one of the spirits haunting the house. When Tony Pickman drew a picture of the ghost Sallie he had seen, the daughter identified it as her friend, Sallie. (Coincidentally — or not — people who owned the house in the 1940s had a daughter named Sallie, although she did not die in the house or at a young age.)

The Pickmans experienced much phenomena, including:

Tony had an actual sighting of Sallie on Halloween morning, 1993.

While napping, Tony heard of woman’s voice say, “Here’s your remote,” as the TV remote control was placed on his chest by unseen hands.

During the first Sightings taping, Tony received three bloody scratches on his arm.

One night Tony dreamed that he was being pulled out of bed by his wrist by a little girl. Upon waking he found burn marks on his wrist that were much like the fingerprints of a small child.

The Kansas Parnaormal Group has extensively researched and investigated the Sallie House over the years and may be primarily responsible for labeling the haunting as “probably demonic” because of the many violent incidents.

read the full details on this strange mystery