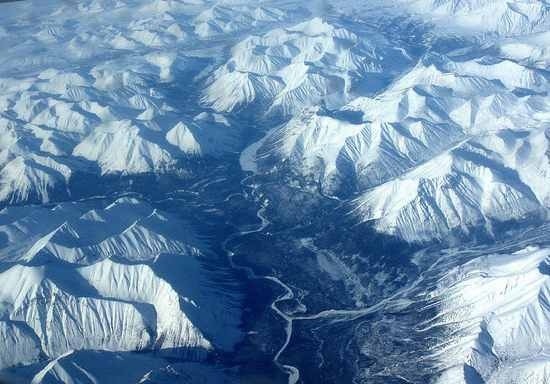 In the Nahanni National Park of Northwest Canada lies the Nahanni River. The area is only accessible by boat or plane and is home to many natural wonders, such as sinkholes, geysers and a waterfall almost double the size of Niagara Falls.

Lord Tweeds Muir (John Buchan), author of The 39 Steps, once said of the valley: “It’s a fancy place that old-timers dream about. … Some said the “valley was full of gold and some said it was hot as hell owing to the warm springs. … It had a wicked name too, for at least a dozen folks went in and never came out’ … Indians said it was the home of devils.”The 200 Mile gorge has become infamous, due to a number of gruesome deaths and many disappearances, earning itself the eerie name, The Valley of the Headless Men. Anomalies first began in 1908, when the Macleod Brothers came prospecting for gold in the valley.

Nothing was heard or seen of the brothers for a whole year, until their decapitated bodies were found near a river. Nine years later, the Swiss prospector Martin Jorgenson was next to succumb to the Valley, when his headless corpse was found. In 1945, a miner from Ontario was found in his sleeping bag with his head cut from his shoulders. While skeptics of an unknown power at work in the Valley would put the grizzly mutilations down to feuding gold prospectors or hostile Indians, there are other strange happenings in the area which add to the valleys mysteriousness.

The fiercely renowned Naha tribe simply vanished from the area a few years prior to the first deaths. Other Indians of the area have avoided the Valley for centuries, claiming an unknown evil haunts it. Many parts of the valley remain unexplored, and there are tales the Valley holds an entrance to the Hollow earth. Others believe the Valley is home to a lost world, with lush greenery and a tropical climate, due to the hot springs generating warm air, as well as untapped goldmines and wandering sasquatches. While a haven for Bigfoot remains unlikely, one thing is for certain, something strange lurks in the Nahanni Valley.

The eerie nickname attached to 200 Mile Gorge comes from a series of unexplained incidents in the Gorge during the Gold Rush of the early 20th century. Two brothers, Willie and Frank McLeod left in 1906 in an attempt to reach the Klondike through Nahanni. Nothing was heard from them for the next two years. Rumours spoke of the two finding the “mother lode” of gold. Despite this, no efforts were made to find them. In 1908, another prospecting expedition discovered two bodies, later identified as the McLeod brothers. Both had been decapitated. This incident would likely have been marked up as just another macabre tale of North had they been the only headless bodies. In 1917, the body of a Swiss prospector by the name of Martin Jorgenson was found next to his burned cabin. Decapitated. In 1945, the body of a miner from Ontario, whose name seems to be lost to history, was found in his sleeping bag, without a head. A trapper named >John O’Brien was found frozen next to his campfire, matches still clutched in his hand. I cannot find any reference to the state of his head.

Theories abound as to what happened to these men, and others (up to 44 people are said to have disappeared there). Some put these attacks down to grizzly bears, some feuding prospectors, others natives. Some say the area is naturally heated by hot springs, and is practically a tropical paradise, a Shangri-La if you will, with the valley floor covered in gold nuggets. These theories often speak of the valley being a haven for the Sasquatch. Some even claim the valley is an entrance to the “Hollow Earth”. My view lies somewhere in-between all these. I believe that the native Naha people discovered this sheltered valley, and settled there. Theoretically, food would be plentiful if the valley is the veritable paradise described in some reports. These people then likely became highly territorial over their lands, and killed any trespassers. The decapitation is reminiscent of certain other tribal practices designed to instill fear in their enemies.