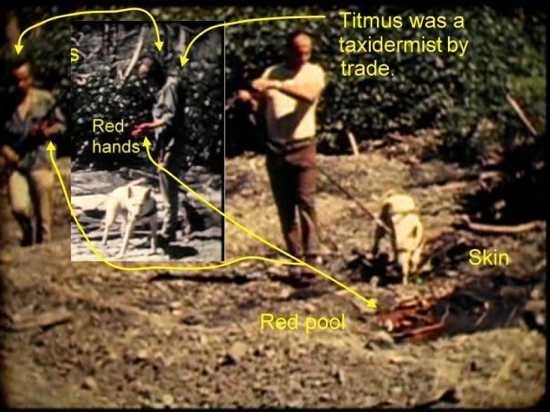 The Patterson-Gimlin film is a famous short motion picture of an unidentified bipedal creature that is said to have been filmed on October 20, 1967, by Roger Patterson and Robert Gimlin on the Klamath River outside of Orleans, California. The footage is one of best pieces of Bigfoot evidence in existence and has been examined by many researchers.

The official story surrounding the video is that it was filmed by Patterson and Gimlin as they stumbled upon a large Bigfoot by the river.

In 2009, another theory emerged which proposed that the famous clip shows a Bigfoot massacre carried out by Patterson, Gimlin, and six other men.Unlike other Bigfoot videos, the Patterson-Gimlin film is unique because it captures a Sasquatch in the open. In most Bigfoot videos made available, the creatures are viewed hiding behind trees or camouflaged on the ground.

This makes the Patterson footage a bit unique and out of the ordinary. As the massacre theory goes, in 2006, a new version of the Patterson-Gimlin film emerged. The copy was much longer and showed eight men killing a family of Bigfoot. According to the story, the film starts off shaky and three Sasquatch are seen entering the picture. The creatures are digging in the sand when they are attacked by a sudden hail of gunfire which comes from the tree line. One of the Bigfoot is instantly shot dead and another bolts for the woods.

The remaining Sasquatch strangely just walks off in the direction of the tree line. As the Bigfoot moves, the men continue to take shots at it from a distance. The walking Bigfoot is said to be the one you see in the popular film. In 2008, Bigfoot researcher M. K. Davis, who specializes in video stabilization, began to endorse the massacre story and claimed that he found evidence for the event. He says that a bloody Sasquatch corpse can be seen in a hole at the beginning of the film, in the earliest frames. Davis also points to a picture which shows Bob Titmus, Dale Moffit, and a white dog named White Lady next to a pile of red material. Davis has speculated that the Bigfoot seen the video was shot twice (once in the leg) and then hunted down. The story also mentions another film which is said to show a bunch of men dragging one of the lifeless bodies, placing it on a tarp or a pool cover, and then cutting it up.