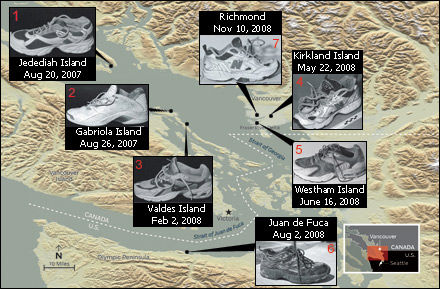 Since August 2007, several detached human feet have been discovered on the coasts of the Salish Sea in British Columbia, Canada, and Washington, USA.

As of December 19th, 2017, thirteen feet have been found in the Canadian province of British Columbia, and four in the US state of Washington. These foot discoveries are not the first…

These foot discoveries are not the first ones on British Columbia’s coast. One was found in Vancouver in 1887, leading to the place of discovery being called Leg-In-Boot Square. On July 30, 1914, the Vancouver Sun reported that recent arrivals from Kimsquit reported a human leg encased in a high boot was found on a beach near the mouth of the Salmon River. It was thought the remains were from a man who had drowned on the river the previous summer.

The series of discoveries has been called “astounding” and “almost beyond explanation”, as no other body parts have turned up. 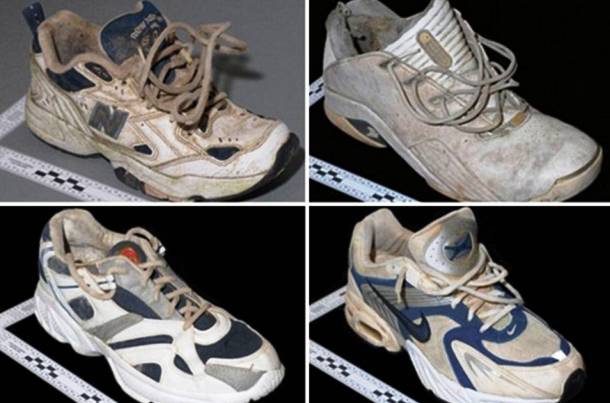 The sudden and regular appearance of the disembodied feet led to speculation that perhaps a serial killer was on the loose, leaving the body parts behind as grisly trophies.

Foul play has also been suggested, although none of the first four feet showed tool marks. This does not rule out foul play, however; it is possible that the bodies could have been weighted down and disposed of, and the feet were separated due to natural decay.

Determining the origin of the feet is complicated because ocean currents may carry floating items long distances, and because currents in the Strait of Georgia are unpredictable. A foot may float as far as 1,000 miles. Also, human feet have a tendency to produce adipocere (a soap-like substance formed from body fat), which makes it hard for forensic scientists to find clues. Under optimal conditions, a human body may remain intact in water for as long as three decades, meaning that the feet may have been floating around for years.

Another theory is that the feet belonged to people who died in the Asian tsunami on December 26, 2004. Richmond-based writer Shane Lambert has advocated this position, pointing to the fact that many of the shoes found were manufactured and sold in 2004 or earlier. Lambert acknowledges that there could be other sources for the shoes or multiple sources. However, besides the dates when the shoes were manufactured, Lambert cites ocean currents and their ultimate northward tendencies up the Pacific Ocean from part of the region that was hit by the 2004 tsunami.

August 20, 2007 – Jedediah Island, British Columbia, Canada – A girl visiting from Washington picked up a size 12 Adidas shoe and opened the sock to find a man’s right foot. It is thought to have become disarticulated due to submerged decay. This kind of shoe was produced in 2003 and distributed mainly in India. A man’s right foot; size 12 white-and-blue-mesh running shoe. The remains were identified as those of a missing man suffering from depression.

August 26, 2007 – Gabriola Island, British Columbia, Canada – A man’s right foot, discovered by a couple, also disarticulated due to decay. It was waterlogged and appeared to have been taken ashore by an animal. It probably floated ashore from the south. The shoe, a size 12 white Reebok, was produced in 2004 and sold worldwide but primarily in North America, and the type has since been discontinued.

February 8, 2008 – Valdes Island, British Columbia, Canada – A right foot in a size 11 Nike. The remains were identified as a 21-year-old Surrey man reported missing four years prior, whose death is considered “not suspicious”, indicating either misadventure or suicide. This type of shoe was sold in Canada and the United States between February 1, 2003, and June 30, 2003. It has been confirmed that this right foot, and the left foot found on June 16 on Westham Island belonged to the same man.

May 22, 2008 – Kirkland Island, British Columbia, Canada – A woman’s right foot; blue-and-white New Balance sneaker. The fourth foot was discovered on an island in the Fraser Delta between Richmond and Delta, British Columbia. It was also wearing a sock and sneaker. It is thought to have washed down the Fraser River, having nothing to do with the ones found in the Gulf Islands. The shoe was a New Balance sneaker manufactured in 1999. In 2011, this foot was identified as belonging to a woman who jumped from the Pattullo Bridge in New Westminster in April 2004.

June 16, 2008 – Westham Island, British Columbia, Canada – A man’s left foot was found by two hikers on June 16, floating in water in Delta. It has been confirmed that this left foot and the right foot found on Valdes Island belonged to the same man.

August 1, 2008 – Near Pysht, Washington, US – A right foot inside a man’s black size 11 shoe was discovered by a camper on a beach. The site of the discovery was less than 16 kilometers from the international border in the Strait of Juan de Fuca. This was the first foot of the series to be found outside of British Columbia. The RCMP and Clallam County Sheriff’s Department agreed that the foot could have been carried south from Canadian waters.

November 11, 2008 – Richmond, British Columbia, Canada – A known woman’s left foot, in a shoe that was found floating in the Fraser River in Richmond. The shoe was described as a small New Balance running shoe. A forensic DNA profiling analysis indicated that it was a genetic match to the foot discovered on May 22 on Kirkland Island.

October 27, 2009 – Richmond, British Columbia, Canada – A right foot in a size 8½ Nike running shoe on a beach in Richmond. The remains were identified as a Vancouver-area man who was reported missing in January 2008 and died of natural causes.

August 27, 2010 – Whidbey Island, Washington, US – A woman’s or child’s right foot, without a shoe or sock. This foot was determined to have been in the water for two months. Detective Ed Wallace of the Island County Sheriff’s Office released a statement saying the foot would be tested for DNA. However, there was no match found in the national DNA database.

December 5, 2010 – Tacoma, Washington, US Found on the tidal flats. – “The right foot was still inside a boy’s size 6 ‘Ozark Trail’ hiking boot, and likely belonged to a juvenile or small adult,” police spokesman Mark Fulghum said about the discovery.

August 30, 2011 – False Creek, British Columbia, Canada – Sex unknown. The foot was found in a man’s white and blue size 9 runner, floating next to the Plaza of Nations marina, attached to the lower leg bones. It had disarticulated naturally at the knee due to the water.

November 4, 2011 – Sasamat Lake, British Columbia, Canada – A man’s right foot inside a size 12 hiking boot was discovered by a group of campers in a pool of fresh water at Sasamat Lake near Port Moody. In January 2012, this foot was identified by the B.C. Coroner’s Service as that of Stefan Zahorujko, a local fisherman who went missing in 1987. Police believe the foot separated naturally from the body and do not suspect foul play.

January 26, 2012 – Vancouver, British Columbia, Canada – The remains of “what appears to be human bones inside a boot” were found in the sand along the water line at the dog park near the Maritime Museum at the foot of Arbutus Street, in Vancouver.

May 6, 2014 – Seattle, Washington, US – Human foot in white New Balance shoe found along the shoreline of Centennial Park near the Pier 86 grain terminal. The New Balance model 622 athletic shoe was white with blue trim, size men’s 10½.

February 12, 2016 – Vancouver Island, BC, Canada – A foot washed up near Port Renfrew on Vancouver Island. BC Coroners Service said it matches one found there five days earlier.

Source: History and Other things

What if your feet fell off!