Two days before Christmas, 1927, Santa Claus walked into the First National Bank of Cisco, Texas, followed by several delighted children who had seen him on the street. Then Santa pulled out a gun and robbed the bank.

“Santa” was Marshall Ratliff. The bank, despite its impressive name, was nothing more than a glass-fronted store. Ratliff and three accomplices stuffed their Santa sack with over $12,000, but they were seen through the windows. The police and a number of armed townspeople arrived and began blasting away. It didn’t help that the Texas Bankers Association had made it known that it would pay $5,000 to anyone who shot a bank robber.

As they planned the crime in Wichita Falls, the safe-cracker came down with the flu, and the trio pulled in Davis, a relative of Helms and a family man in need, promising a large return for his participation. During this period in Texas, three or four banks were being robbed every day, and in response, the Texas Bankers Association had offered a $5,000 reward to anyone shooting a bank robber during the crime.

In addition, Ratliff knew that he would be immediately recognized if he returned to Cisco. This made the heist a particularly dangerous undertaking for the four men, so Ratliff decided to conceal his identity by disguising himself as Santa Claus. Such a disguise would also allay any suspicions by people in the bank. Stealing a car in Wichita Falls, they headed for Cisco and arrived on the morning of December 23. 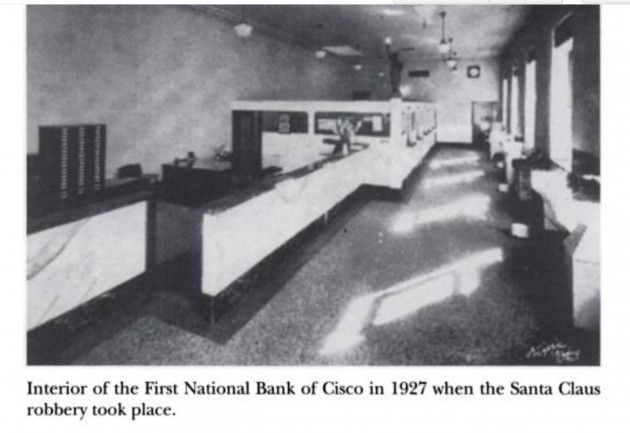 As the group neared the bank, Ratliff donned a Santa Claus suit he had borrowed from Mrs. Midge Tellet, who ran the boarding house where they had been staying in Wichita Falls. They let Ratliff out several blocks from the bank. Ratliff, dressed as Santa, was smiling as he came along Main Street, stopping to chat with eager children, answering their questions and patting them on the head. The main street of Cisco was crowded with people going about their daily activities. The town had the normal decorations for the season.

Everyone was in the Christmas spirit, so no one thought it odd when Santa came walking down the street around noon, one day before Christmas Eve. Still followed by children attracted to “Santa,” Ratliff joined the other three in an alley and led the way to the bank. Some of the happy children who had followed Santa continued into the bank after him.

Once inside, Ratliff received a pleasant greeting of “Hello, Santa,” from the cashier. He did not respond, but walked to a desk in the middle of the lobby, where bank customers wrote out their deposit slips. A few customers were already at the teller’s window making their deposits. The cashier again called out, “Hello, Santa.” Again, no response.

Right about at this point, Ratliff’s accomplice, Robert Hill, entered the Bank, pointed a pistol at the cashier, and snarled, “Hands up!!” The second bandit, Henry Helms, also entered brandishing a gun, followed by the third armed man, Davis.

Ratliff pushed through a swinging door, past the cashier’s desk, went into the cashier’s cage, opened a drawer under the counter, and removed a pistol from that location, stuffing it under his red Santa suit. Now there were four armed men, including “Santa Claus”.

“Santa” ordered the assistant cashier to open the safe, and began stuffing money and bonds into a sack he had hidden beneath his costume. While the others covered the customers and employees, Ratliff grabbed money from the tellers and forced one to open the vault.

Amazingly only three people were killed — two of them police officers — although there were at least 200 bullet holes in the bank. A plaque, “Scene of daring Santa Claus Bank Robbery,” recounts the details.

Marshall Ratliff survived, but not for long. A mob, angry that the phony Santa had been spared the death penalty, dragged him from his cell in the nearby Eastland County Jail and hanged him from a telephone poll. 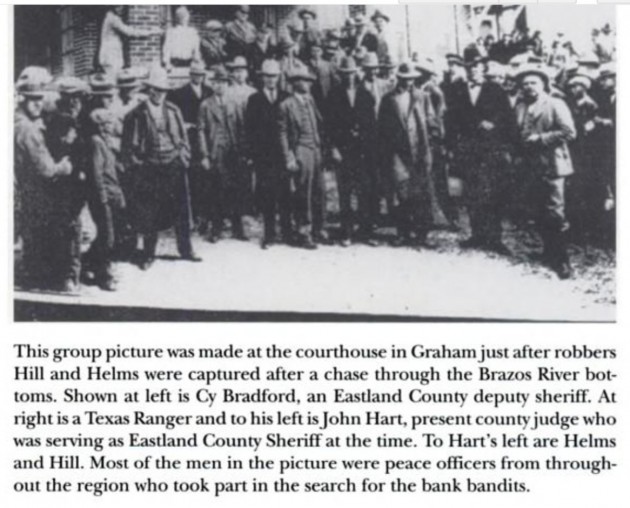