After finding that his German sausages were well-liked in Chicago, Adolph Luetgert built a sausage plant at the southwest corner of Hermitage and Diversey Parkway in 1894. He was so taken with his own success that he also built a three-story frame house next door to the factory, which he shared with his wife Louisa. 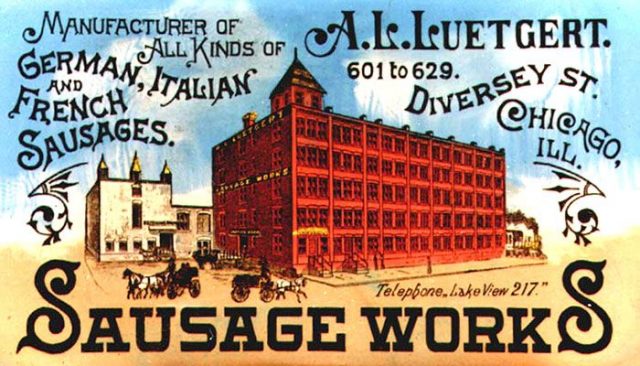 Louisa Bicknese was an attractive young woman who was ten years younger than her husband. She was a former servant from the Fox River Valley who met her new husband by chance. He was immediately taken with her, entranced by her diminutive stature and tiny frame. She was less than five feet tall and looked almost child-like next to her burly husband. As a wedding gift, he gave her a unique, heavy gold ring. Inside of it, he had gotten her new initials inscribed, reading “L.L.”. Little did he know at the time that this ring would prove to be his undoing.

According to friends and neighbors, Luetgert’s fascination with his beautiful, young wife did not last long. The couple was frequently heard to argue and their disagreements became so heated that Luetgert eventually moved his bedroom from the house to a small chamber inside of the factory. Luetgert soon became involved with a girl named Mary Simerling, Louisa’s nice and a household servant. This new scandal also got the attention of the people in the neighborhood, who were already gossiping about the couple’s marital woes.

Vanished! Without a trace

Then, on May 1, 1897, Louisa disappeared. When questioned by his sons, Luetgert told them that their mother had gone out the previous evening to visit her sister. After several days though, she did not come back. Finally, Diedrich Bicknese, Louisa’s brother, went to the police. The investigation fell on Captain Herman Schuettler, who author Richard Lindberg describes as “an honest but occasionally brutal detective”.

The detective and his men began to immediately search for Louisa. They questioned neighbors and relatives and soon learned of the couple’s violent arguments. They also talked to Wilhelm Fulpeck, an employee of the sausage factory, who recalled seeing Louisa enter the factory around 10:30 in the evening on May 1. Frank Bialk, a night watchman at the plant, confirmed his story. He also added that he saw both Luetgert and Louisa at the plant together. Apparently, Luetgert sent him out on an errand that evening and gave him the rest of the night off.

Schuettler also made another disturbing and suspicious discovery. Just a short time before Louisa’s disappearance, the factory had been closed for ten weeks for reorganization. However, the day before Louisa vanished, Luetgert ordered 378 pounds of crude potash and fifty pounds of arsenic. The circumstantial evidence was starting to add up and Schuettler began to theorize about the crime. He became convinced that Luetgert had killed his wife, boiled her in acid and then disposed of her in a factory furnace. With that in mind, he and his men started another search of the sausage plant. They narrowed the search to the basement and to a twelve-foot-long, five-foot-deep vat that was located next to the furnaces that smoked the meat. The officers drained the greasy paste from the vat and began poking through the residue with sticks. Here, officer Walter Dean found a small piece of a skull fragment and two gold rings. One of them was engraved with the initials “L.L.”.

On May 7, Adolph Luetgert, proclaiming his innocence, was arrested for the murder of his wife. No body was ever found and there were no witnesses to the crime, but police officers and prosecutors believed the evidence was overwhelming. Luetgert was indicted for the crime a month later and details of the murder shocked the city, especially those on the northwest side. Even though Luetgert was charged with burning his wife’s body, local rumor had it that she had been ground into sausage instead. Needless to say, sausage sales declined substantially in 1897.

Luetgert went to trial but the proceedings ended in a hung jury on October 21 after the jurors failed to agree on a suitable punishment. Some argued for the death penalty, while others voted for life in prison. Only one of the jury members thought that Luetgert might be innocent. A second trial was held and on February 9, 1898, Luetgert was convicted and sentenced to life imprisonment at Joliet.

Luetgert was taken away to prison, where he became a shell of his former self. He babbled incoherently to the guards, claiming that his dead wife was haunting him, intent on having her revenge, even though he was innocent of her murder.

Luetgert, possibly insane by this time, died in 1900. And he was not the only one to suffer…. His attorney, Lawrence Harmon, believed that his client was telling the truth and that he did not kill his wife. He was sure that she had simply disappeared. In fact, Harmon was so convinced of Luetgert’s innocence that she spent over $2,000 of his own money and devoted the rest of his life to finding Louisa. Eventually, he also went insane and he died in a mental institution.

And Louisa, whether she was murdered by her husband or not, reportedly did not rest in peace. Not long after her husband was sent to prison, her ghost began to be seen inside of the Luetgert house. Neighbors claimed to see a woman in a white dress leaning against the mantel in the fireplace. Eventually, the house was rented out but none of the tenants stayed there for long. The ghost was also reported inside of the sausage factory but the place was later abandoned and recently, portions of it were turned into condominiums. As of this writing, no reports of the ghost in these new structures have surfaced.

Legend still has it on the northwest side that Louisa Luetgert still walks. If she does, she probably no longer recognizes the neighborhood where she once lived as the factory is long gone and the houses that once stood here have been replaced in recent years with condos and new homes. They say though, that if you happened to be in this area on May 1, the anniversary of Louisa’s death, there is a chance that you might see her lonely specter still roaming the area where she lived and died.

The former A.L. Luetgert Sausage and Packing Company and the Luetgert residence was located on the southwest corner of Hermitage Avenue and Diversey Parkway, just before Paulina Street on Chicago’s northwest side.