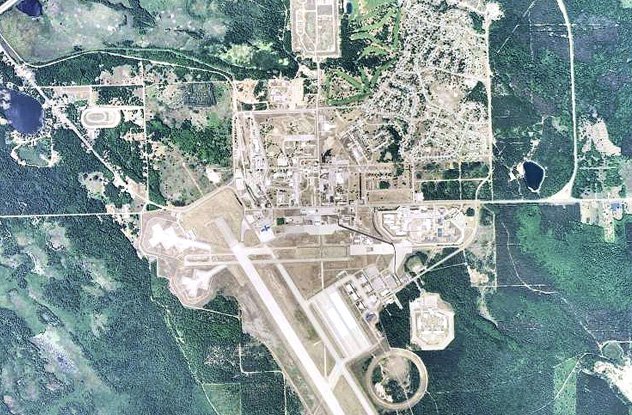 Although US Air Force pilots Felix Moncla and Robert Wilson disappeared over 60 years ago, their names should still be familiar to UFO enthusiasts. During an attempted interception of an aircraft over Lake Superior on November 23, 1953, their plane vanished. Officially, the story was that Moncla crashed in the lake while in pursuit of a Canadian aircraft. However, the UFO community believes that the Kinross Incident, as it was called, involved the pursuit of an alien spacecraft.

A recent development happened in 2006 when a group of divers calling themselves the “Great Lake Dive Company” (GLDC) claimed to have found the wreckage of the plane at the bottom of Lake Superior. Further probing raised a lot of questions regarding the validity of the company itself and statements made by GLDC spokesman Adam Jimenez.

An investigation was carried out by the Mutual UFO Network (MUFON), one of the largest UFO-investigative organizations in the world. They found almost no information about GLDC or “Adam Jimenez” other than their own website and concluded that GLDC was not a legitimate corporation and their claims were unsubstantiated. When pressed for answers, GLDC refused to divulge company or personal information as a security measure, claiming to be under threat from various shadowy groups.

Many investigators dismissed the Great Lake Dive Company as a hoax. The conspiracy-inclined saw their silence as just another cover-up to prevent people from knowing the story of what really happened on Lake Superior 64 years ago.

On November 23, 1953, one of the great mysteries of UFOs began, as an Air Defense Command Ground Intercept radar controller at Truax AFB in Madison, Wisconsin received a radar blip of an unknown object over Lake Michigan. An F-89-C Scorpion was immediately dispatched from Kincross Air Force Base to locate the target. 1st Lieutenant Felix Moncla, Jr. piloted the jet, with 2nd Lieutenant R. Wilson operating the radar.

The Scorpion jet began to approach the unknown flier, but as it did, the UFO began to change its course. Moncla was flying at approximately 500 mph as it neared the UFO. Radar man Wilson was unable to accurately track the UFO, and ground control picked up the info, relaying it back to the Scorpion.

Moncla finally brought his jet to the exact spot of the UFO, but as he did, radar operators at Truax saw both blips as one. For a moment, it was expected that Moncla had gone over or under the UFO, causing the united blip, and that two blips would soon be seen again. But suddenly, the one blip faded, as no radar return was registered. Attempts to contact Moncla from ground control were unsuccessful.

Radar operators marked the last radar return as seventy miles off of Keweenaw Point in the upper part of Michigan. The plane and UFO were marked as 8,000 feet altitude when they both vanished. A search and rescue team, the 433rd Fighter Interceptor Squadron, was immediately summoned, but after an expansive, overnight search not a trace of the Scorpion or UFO was found.

The first official statement of the incident would be released by Norton Air Force Flying Safety Division. After what was obviously a superficial overview of the case, they issued this statement:

… “the pilot probably suffered from vertigo and crashed into the lake.”

Officially, there was no indication that Moncla suffered from vertigo, a very unlikely condition for a pilot, and also he was flying by his instruments, and not using a sight and search approach.

No Indication of Crash:

The problem with the crash theory is that if the Scorpion had exploded, it is very likely that some debris would have been found. But, the search found no metal fragments, oil slicks… nothing that would indicate there had been a crash. Interestingly enough, government records listed the crash as an accident, nothing more.

Off the record, those close to the case believed that the loss of the Scorpion was a direct result of an encounter with the unknown object, clearly seen on radar. In recent months, the Michigan Diving Company has made assertions that they may have found the jet and the UFO, but this finding is still being investigated.