For decades, firefighters at the Chicago Fire Department noticed an eerie hand print that left a permanent mark on a casement, which could not be washed, scraped or removed, despite several attempts. Legends circulated, and many believed that the handprint had a rather macabre history, belonging to a fellow firefighter named Francis Leavy who succumbed to an accident. 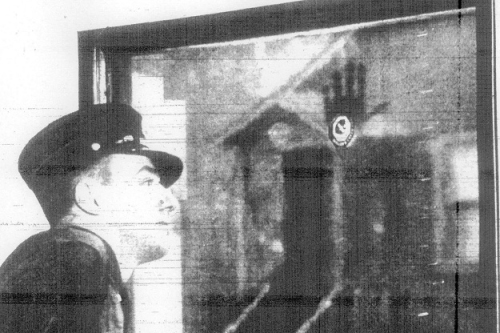 Francis Leavy was a dedicated firefighter during the 1920s. He loved his job, and his peers loved him. He was a pleasant man, always ready with a smile and a helping hand. On April 18, 1924, Francis’s colleagues became aware of a change in his demeanor. Suddenly, he was an unsmiling, grunting guy washing a large window at the Chicago Fire Department, not looking at anyone or talking.

After a few minutes, Leavy suddenly announced that he had a strange feeling—a feeling that he might die that very day. At that very moment, the phone rang and broke the heavy atmosphere brought on by the fireman’s words. A fire was raging at a building quite a long way from the fire department, and no time was to be wasted.

In just a few minutes, Francis Leavy and his fellow firefighters were on the scene, assessing the situation and helping those trapped on the top floors. Everything seemed to be on track to rescue everyone from the building. Then, suddenly, the flames engulfed the lower part of the building, and the roof caved in. As soon as this happened, the walls came crashing down, pinning many people under the rubble—including Leavy. Leavy’s grim premonition came true. He lost his life that day trying to save others.

The very next day, trying to come to terms with the loss of Leavy, his colleagues sat at the firehouse thinking about the events of the previous day. Suddenly, they noticed something strange on one of the windows. It looked like a handprint smudged onto the glass. Eerily, it was the very same window that Francis Leavy was busy washing the day before.

The firemen cleaned the window again, but the print stubbornly refused to disappear. For many years, the handprint remained on the window in spite of chemicals used to try and remove it. The strange mystery remained unsolved, but came to an abrupt end when a newspaper boy threw a paper against the window in 1944, causing it to shatter into pieces.