The Galapagos Affair: When Satan Came to Eden

When Berlin physician Friedrich Ritter came to the island of Floreana in the Galapagos Islands in 1929 with his lover Dore Strauch, it was neither developed nor inhabited. A small island around 80 kilometers (50 mi) from Santa Cruz, the nearest neighboring island with even any suggestion of a populace, Floreana would be their paradise.

Shortly afterward, the Wittners, Heinz, Magrett, and their teenage son, also moved to the island. However, the expected paradise of Ritter and Strauch as well as the Wittners was about to take a turn for the worst with the arrival of “Baroness” Eloise Wehrborn de Wagner-Bosquet in 1931. She was accompanied by Robert Phillipson (one of her lovers), Rudolph Lorenz (another alleged lover), and an Ecuadorian named Manuel Valdivieso.

Wagner-Bosquet had managed to secure a patch of land through a contact in the Ecuador government. The land, however, contained a water spring that the Wittmers had been using. When the island was hit by a drought, things began to turn nasty.

Ritter wasn’t happy about more people encroaching on their ideal island in the Sun, and the Wittmers blamed Wagner-Bosquet and her entourage for the drought and the limiting of their use of the spring. Wagner-Bosquet herself was said to “play her lovers off against each other.” In short, she hadn’t exactly made friends fast on the island.

No one else, it seemed, could recall a yacht or any other boat arriving on the island that day. Wagner-Bosquet had also left practically all of her things behind, supposedly in the care of Lorenz. Again, that was the story that Margret told.

Following her disappearance, other suspicious activity unfolded on the once-magical island. Ritter himself died, allegedly from food poisoning from eating infected chicken. This is particularly strange, as Ritter was a vegetarian.

Lorenz had also began to act nervous and desperate to get off the island. He paid a Norwegian fisherman to help him get to Santa Cruz. However, they, too, did not make their destination. Instead, their bodies were both discovered on the island of Marchena, almost mummified.

Strauch returned to Germany and insisted in a book she wrote that Lorenz had killed Wagner-Bosquet and Phillipson, possibly out of jealousy. However, it appears that Margaret Wittmer may have been involved, directly or indirectly, in the lovers’ deaths and quite possibly in those of Ritter and Lorenz as well. 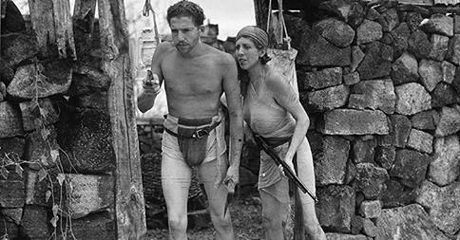 The documentary plays like a suspense story. A lineup of stars — Cate Blanchett, Sebastian Koch, Thomas Kretschmann, Diane Kruger & Connie Nielsen – recites the passages from the diaries of the settlers, making the story seem even more personal. The show even has a satisfying ending, because we feel we learn enough about the settlers to formulate our own theories of Who killed Whom.