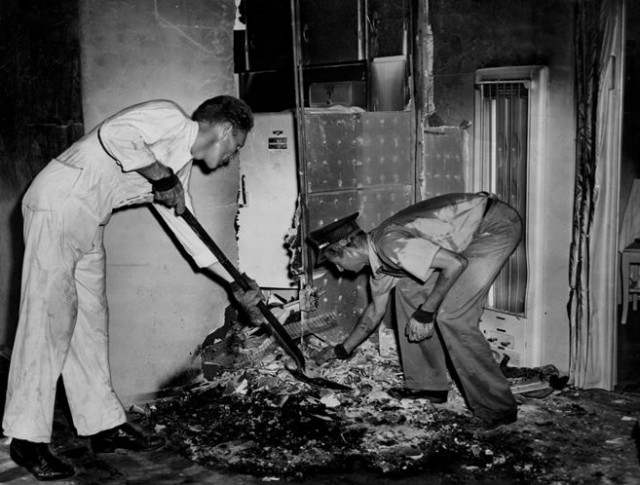 The last time Mary had been seen alive was at 9pm on the night of the fire. Her son, Dr. Richard Reeser, and her landlady, Mrs Pansy Carpenter, had visited Mary and said their farewells at about 9:00 pm, leaving Mary sitting comfortably in her easy chair.

July 2nd, the morning after the fire, Mrs Carpenter found the door handle to Mary’s apartment was hot to the touch. Suspecting a fire had taken place she immediately called the police.

Upon entering Mary’s apartment, a grisly sight confronted them. The freakish remains of Mary were discovered on a burned out chair with only the charred, coiled springs remaining. The only parts of her left, were her left foot, which still had a slipper on, her backbone and a mysteriously shrunken skull. Mary’s body, which weighed 170 lbs had been reduced to less than 10lbs.

The only damage to the apartment was a small, circular burned area. At the side was a plastic wall socket which had melted and caused her clock to stop at 4:20am. These findings and the remains of Mary baffled the firemen, police, and pathologists who examined them. 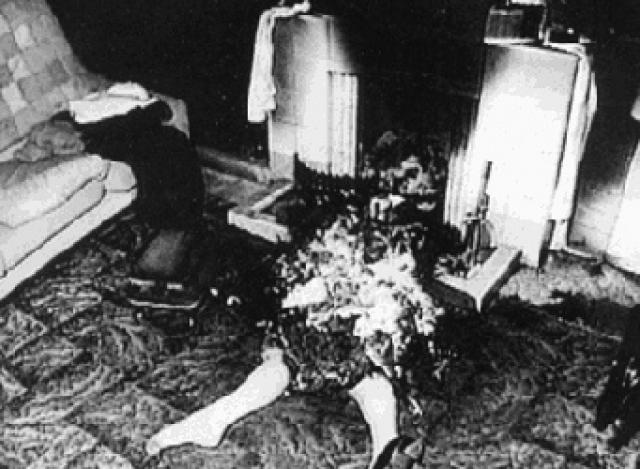 Mary’s apartment showed all the signs of heat damage. Walls were covered with a greasy soot, a mirror had cracked, plastic switch’s and two candles on a dresser, which left behind their unburned wicks and a pink pool of wax below.

Experts said that a temperature of 2500 degrees is necessary for such an extreme cremation. A cigarette could never have produced such a high temperature if it had ignited the chair or clothing. An FBI pathologist carried out tests for gasoline but nothing was found. Even a lightning storm had been considered, but no such storm had occurred in St. Petersburg the night of her death.

On 7 July 1951, St. Petersburg police chief J.R. Reichert sent a box of evidence from the scene to FBI Director J. Edgar Hoover. He included glass fragments found in the ashes, six “small objects thought to be teeth,” a section of the carpet, and the surviving shoe.

Reichert sent with the evidence, a note which read: “We request any information or theories that could explain how a human body could be so destroyed and the fire confined to such a small area and so little damage done to the structure of the building and the furniture in the room not even scorched or damaged by smoke.”

Months after the death of Mary Reeser, the Chief of Police and the Chief of Detectives signed a statement, which reported the death of Mary to that of falling asleep with a cigarette. Even though this reason was already concluded that such a fire was an impossibility. The declaration served to publicly close the investigation.

So what really happened to Mary Reeser? Could it have been Spontaneous Human Combustion?

This is a brief account of how Wikipedia describes SHC:

“Spontaneous human combustion (SHC) describes alleged cases of the burning of a living human body without an apparent external source of ignition. While there have been about 200 cited cases worldwide over a period of around 300 years, most of the alleged cases are characterized by the lack of a thorough investigation, or rely heavily on hearsay and oral testimony. In many of the more recent cases, where photographic evidence is available, it is alleged that there was an external source of heat present (often cigarettes), and nothing occurred “spontaneously.”

Many hypotheses attempt explanations for the various cases of human spontaneous combustion. These generally fall into three groups:

* Natural explanations based on an unknown and otherwise unobserved phenomenon (e.g., production of abnormally concentrated gas or raised levels of blood alcohol cause spontaneous ignition)

* Natural explanations that involve an external source of ignition (e.g., the victim dropped a cigarette)