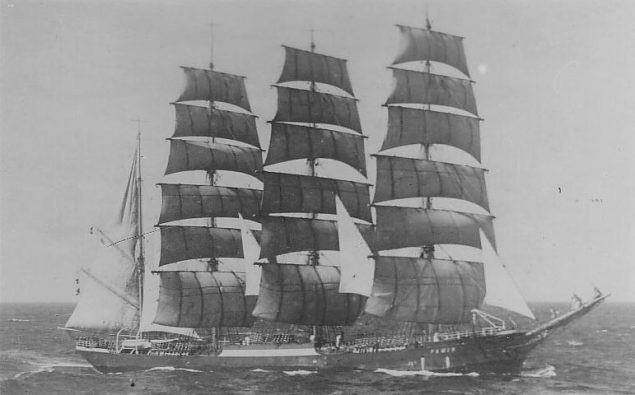 The official story of the Pamir goes something like this:

Pamir, a four-masted barque, was one of the famous Flying P-Liner sailing ships of the German shipping company F. Laeisz. She was the last commercial sailing ship to round Cape Horn, in 1949. By 1957 she had been outmoded by modern bulk carriers and could not operate at a profit. Her shipping consortium’s inability to finance much-needed repairs or to recruit sufficient sail-trained officers caused severe technical difficulties. On 21 September 1957 she was caught in Hurricane Carrie and sank off the Azores, with only six survivors rescued after an extensive search

However, legend tells a much stranger story – and one that evidence now suggests could be true!

The Pamir left Buenos Aires in August 1957 carrying 3,790 tons of barley. Five hundred miles (800km) from the Azores, on 20 September, she met up with Hurricane Carrie. Her final message was heard on the airwaves at 8pm on 21 September:

When the US freighter Saxon arrived at the Pamir’s last position, all they found was a lifeboat with five survivors. The next day, one more survivor was discovered, but 80 souls had gone to the bottom.

Four years later, another sail-trainer, the Esmereld, from Chile, was battling a gale in the English Channel when she sighted another sailing vessel; it was identified as the Pamir. The Esmereld’s report was taken with a large pinch of salt until some months later, when the yachtsman Reed Byers reported seeing the Pamir off the Virgin Islands.

Other sail training vessels – the German Gorch Foch and the Norwegian Christian Radich – also reported sighting the phantom ship, and the US Coastguard vessel, Eagle, crossed her path too.

As if this wasn’t dramatic enough, some embroiderers report that each time she is sighted, the Pamir’s crew are seen lined up on deck… and with each sighting their number decreases. On her last materialisation, only 20 were visible.