Old Fisher Hall was an ideal setting for the most famous Miami Mystery. Originally the home of Oxford College for Women, it was converted into an asylum and sanitarium after being purchased by Dr. Harvey Cook in the 1880’s. Dr. Cook made a number of additions and renovations to the property, now called the Oxford Retreat. Among these was the acquisition of the building that came to be known as the Pines and an adjoining structure, dubbed Cook Place, which the Doctor used as his residence. Among the more interesting features of the Retreat property was an underground tunnel leading from the Pines to Cook Place. The purpose of the tunnel, it was said, was to enable Dr. Cook to get from his house to the Pines without being seen by his patients

Miami acquired the Retreat property in stages beginning in 1925. The old College building, acquired first, was renamed Fisher Hall and became a residence hall for Miami students. During the coming years, Hall residents occasionally stumbled upon used straitjackets and other Oxford Retreat mementos. On April 19, 1953, one Fisher Hall resident stumbled from his room straight into Miami legend. 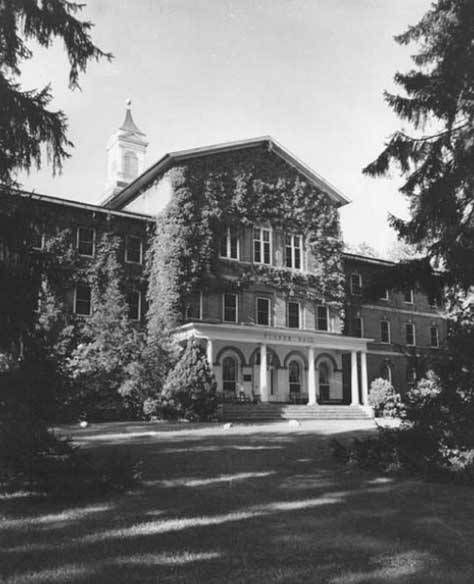 On the surface, Ronald Henry Tammen, Jr. appeared to be a typical college student of his day. A sophomore RA, he played string bass in the Campus Owls, the University dance band; belonged to Delta Tau Delta fraternity; and was a member of the wrestling team. At approximately 8:00 Sunday evening, April 19, 1953, Tammen left his Fisher Hall room to get new bed sheets from the Hall manager because someone had put a fish in his bed. Tammen took the sheets and returned to his dorm room to study psychology. It was the last time he was definitely seen alive. At 10:30 p.m., Tammen’s roommate returned to find Tammen’s psychology book laying open on his desk and all the room lights on. The roommate didn’t think anything of it; he assumed that Tammen had decided to spend the night in the Delta Tau Delta house. It was only when Tammen failed to return the following day that the roommate became worried and a search for the missing student was begun

To this day, Ronald Tammen’s fate is unknown. Some believe he was murdered; others feel he might still be alive. One witness claimed that Tammen, dazed and unable even to remember name, came to her Seven Mile home early on the morning of April 20, seeking directions to the nearest bus stop. Other sightings, both of Ron Tammen and of his ghost, have been reported on a number of occasions. In 1973, the Butler County Coroner revealed that Tammen had visited his office, seeking a blood test, five months to the day before his disappearance. The Coroner claimed that, in his 35 years of practice, Ronald Tammen was the only person to visit his office with such a request. When Fisher Hall was demolished in 1978, an extensive search of the rubble was conducted, but no signs of Tammen’s remains were found. As time passes, it becomes less and less likely that we will ever know what really happened to Fisher Hall’s most famous resident.