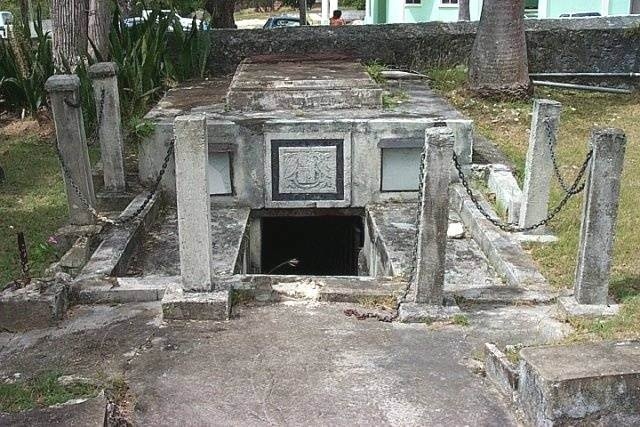 In the 18th century, the Walronds, a wealthy rich family of planters built a rock-hewn tomb at Christ Church, Barbados. It was sealed with a massive marble door.

One family member to be interred there was Mrs Thomasina Goddard, in 1807. A year later the vault was taken over by the Chase family – also slave-owning planters who purchased it to bury two daughters in 1808 and 1812. When the tomb was opened again in 1812 to receive the body of the father, Thomas Chase, the girls’ lead coffins had been stood on end, upside down. There was no sign of a break-in.

Nor was there in 1816, when the tomb was again opened for the body of a boy relative. But the Chase coffins had again been wildly disarranged. That of Thomas, which had taken eight men to carry was leaning upright against the wall of the vault. By the time of the next funeral, eight weeks later, word of the strange tomb had got around and a huge crowd turned up for the ceremony. They were not disappointed. Although the tomb was sealed, the four Chase coffins inside were once more in disarray.

The Governor of Barbados, Lord Combermere, now took a hand. In 1819 he supervised the orderly restacking of the coffins and had seals put round the door slab. But the following year, after reports of noises, he visited the site again. His seals were intact. But the lead coffins were in their customary jumbled confusion. Only the little crumbling, wooden coffin of Mrs Goddard still lay peacefully in the corner.

The confusion around the vault was centered around the lack of a suitable explanation. Slaves could not have moved the coffins without leaving a trace. There was no evidence of flooding. Earthquakes would hardly have shaken one tomb without disturbing others in the surrounding area. After all of the unexplained disturbances, it was decided to empty tomb of it’s occupants and relocate them almost 200 years ago. It remains empty to this day.