Just before the sunset and the dark set in, on September 12, 1952, in Flatwoods, WV, a group of school boys saw a strange UFO streak across the sky and then crash land on a nearby hill.

The boys rushed to the UFO crash site gathering more people along the way.

When they all arrived at the site, they saw a bright pulsating red light, encountered a spooky and nauseating mist, and heard strange inhuman hissing like sounds.

When a member of the group turned a flashlight in the direction of the sound, the beam fell on a pair of shining eyes, it also revealed a huge alien like creature.

The creature, which seemed to be over six feet tall, moved towards the group. Later, witnesses claimed it seemed to be gliding rather than walking. As it hissed and glided at them, the group panicked and fled.

The next day investigators discovered skid marks and an unidentified oil-like substance that presumably came from the UFO. 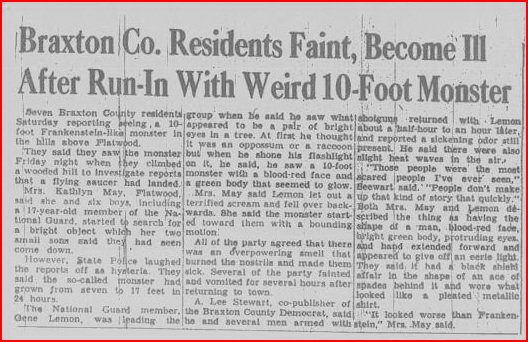 The encounter, (which the newspapers quickly dubbed “The Flatwoods Monster” sighting) took place during a flurry of sightings of unusual flying objects in the region.

Bailey Frame, a resident of nearby Birch River, reported seeing a bright orange ball circling over the area where the monster was spotted. It was visible for around fifteen minutes before veering off towards the airport at Sutton, where the object was also reported.

According to an account, one week before the Flatwoods event, a Weston woman and her mother encountered the same or similar creature. The younger woman was so frightened that she needed hospitilization after the event. Both also reported the noxious odor.