It was a dark night on November 12, 1966, when five men who were digging a grave at a cemetery near Clendenin, WV claimed to see a man-like figure fly low from the trees over their heads. They reported the man like creature to be “like a bat from hell”.

Shortly thereafter, on November 15, 1966, two young couples from Point Pleasant, Roger and Linda Scarberry, and Steve and Mary Mallette told police they saw a large creature whose eyes “glowed red” when the car headlights picked it up.

They also described it as a “large flying man with ten-foot wings” which followed their car while they were driving in an area outside of town.

Over the coming days no fewer than 20 other people reported seeing a similar “Mothman” like beast. The last reported sighting was on December 15 1966 – A year to the day before the tragic Silver Bridge collapse.

Many of those that sighted the Mothman also reported that the sighting led to a sandy dry feeling in their eyes, usually accompanied by redness, swelling and watering.

Mary Mallette, one of the first witnesses of the Mothman also experienced an ear trauma. At a later sighting, after hearing a “loud metallic noise”, her ear began to bleed – a sign of concussion, or meaning the air pressure had changed suddenly.

Others reported losing track of time, often hours whilst a couple of witnesses also claimed experiences that convinced them something was reading their minds.

On December 15, 1967, the Silver Bridge, which was nearby to all the reported sightings of the Mothman, collapsed. The collapse happened whilst the bridge carried the full weight of rush-hour traffic.

There were 37 vehicles on the bridge at the time it collapsed into the Ohio River.

The tragic disaster resulted in the deaths of 46 people. Two of the victims were never found. 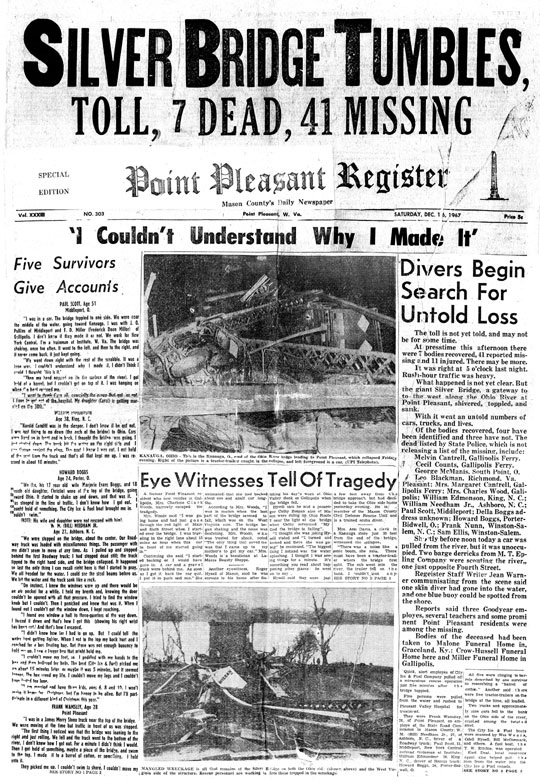 Many people throughout the world believe Mothman is an indicator of impending disaster. Claims have been made that it has been seen before a number of large scale accidents, including in Chernobyl, Ukraine prior to the nuclear accident of 1986.

After the incidents occur, Mothman sightings seem to disappear entirely, only backing that theory further.

No actual account of a prophecy about the silver bridge collapsing before the event was recorded, but many have since claimed the Mothman sightings foretold of a “bad event” coming to Point Pleasant