The strange story know as the Baldoon Mystery is a legendary ghost story that is part of the folklore of Wallaceburg, Ontario.

In 1829, the family of John McDonald had a picturesque two-story frame house in a Scottish settlement named Baldoon, near the town of Wallaceburg, Ontario.

The story goes that the family suffered an extraordinary series of poltergeist attacks culminating in their house being burned to the ground; whereupon they moved in with their father nearby only to have the attacks continue unabated.

The McDonald family claimed they heard noises of people marching through their kitchen, saw bullets and stones come through windows, and stated fires started around the house.

The dishes of water would rise of their own accord from the table, the tongs and shovel bang against each other on the hearth, the chairs and tables fall over with a loud crash, and even that sober domestic creature, the kettle on the hearth, would toss off its lid, tip over on one side, and suddenly, as if seized by unseen hands, dash itself in a paroxysm of fury on the floor.

An Indian knife, with a blade ten inches long, was violently dashed against the window frame and its blade stuck fast in the casement.

Many visitor who witnessed such incidents firsthand, along with statements offered by 26 family members, relatives, and neighbors who were there and were party to the strange events.

Freaked out by the strange events, the McDonalds finally enlisted the aid of another local woman claimed to be a white witch,

This witch told them to make a bullet out of silver and shoot a black-headed goose with it, and if they wounded the bird, the witch would be wounded also.

Supposedly after McDonald used the bullet to break the wing of the goose, he encountered an old woman seated in a rocking chair on her front porch with a broken arm, and after that point there were no more disturbances at the McDonald farm. 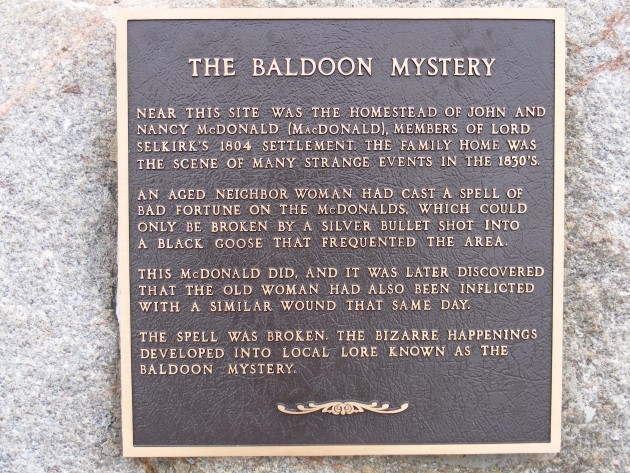