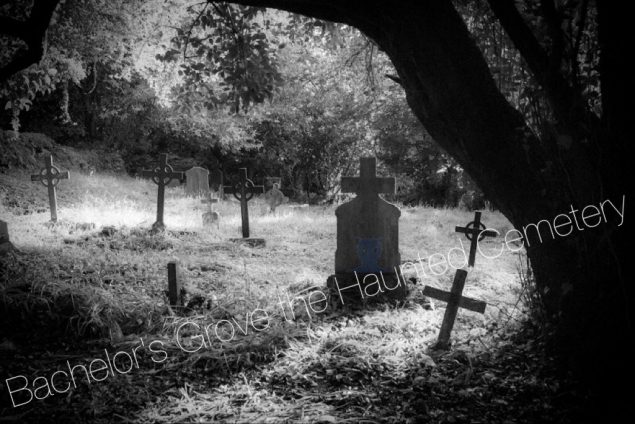 Bachelor’s Grove Cemetery is a small, one-acre plot near the Rubio Woods Forest Preserve, southwestern suburb of Midlothian also famous as one of the Chicago area’s most haunted sites, with a long history of more than 100 reports of paranormal phenomena occurring there. The cemetery is fenced in, with a single gate on the south side and a single path winding through the plot. A stagnant pond lies just outside the northwestern corner. The cemetery is overgrown and unkempt and is subject to frequent vandalism, perhaps because of the popularity of the haunting legends. Graves and markers have been defaced and mutilated, and coffins have been disinterred and opened. Evidence of animal sacrifices near a lagoon at one corner of the cemetery has pointed to possible occult rites practiced there. 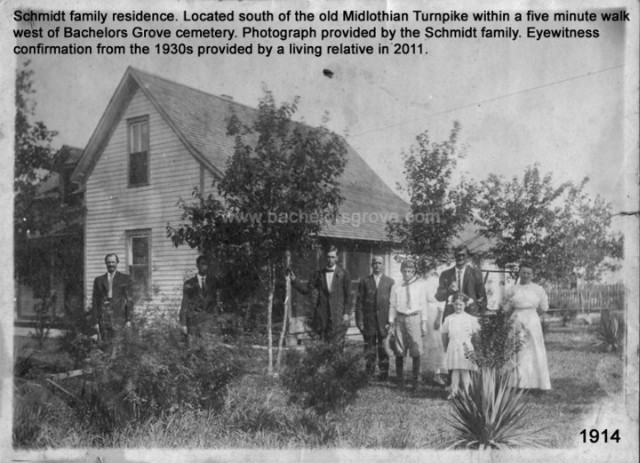 The cemetery was first known as Everdon’s Cemetery, and the first burial was in 1844. It is not certain why the cemetery became known as Bachelor’s Grove in 1864. According to one popular story, the name came from unmarried men who were among the first settlers. Perhaps more likely, it was derived from a German family name such as Batchelder. During the gangster era of the 1920s and 1930s, bodies of the victims of gang warfare allegedly were dumped in the lagoon.

Stories of haunting phenomena began to proliferate in the 1960s. Burials decreased after 1965, and the area became popular as a lover’s lane and gathering spot for youths—many of whom were eager to be spooked. Youthful vandals also began visiting the cemetery, overturning tombstones, desecrating and opening graves and strewing bones about. Haunting reports reached a peak in the 1970s and 1980s. The last recorded burial was in 1989.

The most-often reported apparition at Bachelor’s Grove is a vanishing house or floating house. It is a two-storied Victorian farmhouse with a white picket fence, a colonnaded porch with a swing and a warm light shining within it. The house is always seen at a distance and looks convincingly real. But those who approach it find that it shrinks in size the closer they get, or abruptly disappears altogether. According to legend, anyone who succeeds in reaching it and entering will never return. The vanishing house has been widely reported since the 1960s and drawn by numerous witnesses; however, there is no historical record of such a house existing in the vicinity.

A number of ghosts of human beings have been reported, including repeated sightings of hooded Phantom Monks, and a woman, called either the “White Lady” or the “Madonna of Bachelor’s Grove.” The presence of phantom monks is puzzling as no monastery was ever in the area. The White Lady carries a baby in her arms and wanders aimlessly through the cemetery on nights of the full Moon. Popular myth says she is the ghost of a woman who is buried there next to the grave of her baby. No historical records document the story.

Other apparitions are a two-headed man, a child, a black carriage and a glowing man in yellow. Many reports have been made of sightings of a ghostly farmer and his horse and plow. The story goes that in the 1870s, a farmer was plowing land near the pond when his horse inexplicably bolted into the water; both man and animal were drowned.

Phantom Vehicles also have been reported on the cemetery’s path and on the Midlothian Turnpike just outside the plot. The vehicles vanish as people approach them. Some people have reported seeing or being in phantom accidents.

Flashing and dancing lights have been reported in the cemetery, especially a blue light that resembles that of a police car. Flashing white lights also have been seen in both daytime and at night, as well as a red light that streaks across the sky over the path in the cemetery. (The Midlothian Turnpike can be seen through the trees on the northwestern side of the cemetery.) The lights do not exhibit quite the same behavior as Ghost Lights. Sightings of these lights were especially frequent during the 1970s. In December 1971, a young woman said she succeeded in putting her hand through one of the flashing lights but felt nothing.

Other phenomena include sensations of unusual cold, the awareness of an invisible presence that causes discomfort and the tactile sensation of sweaty but invisible hands upon the skin. 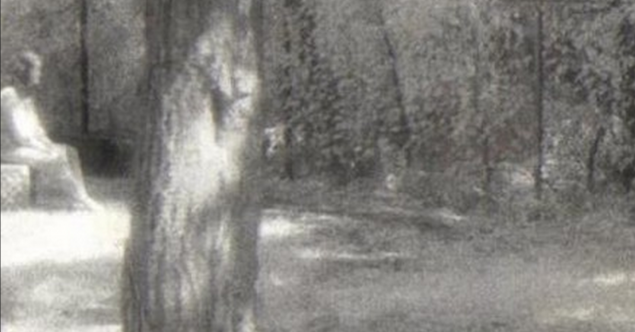 This amazing photograph was taken at Bachelor’s Grove in 1991 on an investigation by the Ghost Research Society using infrared film.

No living person, other than the photographer, was visible at the time, but the photograph clearly shows a human figure seated on the checkered monument near the south entrance.

The woman’s face seems flat, with only a hint of a nose visible. Her feet blend into the grass (which appears white under infrared light), giving an appearance of translucence.

Since this photo was taken, the checkered monument has been photographed hundreds of times without producing anything nearly as spectacular.