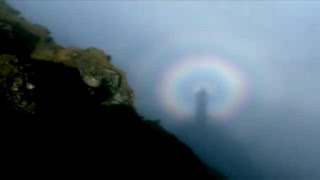 There has long been talk of a Big Grey Man in the Cairngorm mountains. Known locally for decades it entered popular folklore when Professor Normal Collie reported his experiences of Fearlas Mor (as the Big Grey Man is known locally) while on a trip to New Zealand in 1889. He later repeated the story at a meeting of the Cairngorm Club in 1925:

“I was returning from the cairn on the summit in a mist when I began to think I heard something else than merely the noise of my own footsteps. Every few steps I took I heard a crunch, then another crunch as if someone was walking after me but taking steps three or four times the length of my own. I said to myself ‘this is all nonsense’. I listened and heard it again but could see nothing in the mist . As I walked on and the eerie crunch, crunch sounded behind me I was seized with terror and took to my heels, staggering blindly among the boulders for four or five miles nearly down to Rothiemurchus Forest. Whatever you make of it I do not know, but there is something very queer about the top of Ben MacDhui and will not go back there again by myself I know.”

This story from an otherwise sensible man of letters gave credence to the myth and a spate of similar experience emerged as others felt emboldened to tel their own tales. These were later collected by Affleck Grey in his authoritative book on the Big Grey Man – where he explored not only the stories but their possible explanations in an attempt to understand where they came from.

There has never been any real ‘sightings’ as such most stories describe the sense of a ‘presence’ or strange noises, and most agree there is not actually a ‘big grey man’ wandering the slopes of Ben Macdhui. However the persistence of the story indicates it has a resonance even today, and if you venture into the Cairngorms (especially in winter) you become aware of an ancient landscape where myths and legends used to roam freely.

Amongst the many theories several suggest possible explanations. Foremost is that of the Brocken Spectre, a meteorological phenomenon which only occurs when an inversion (or gaps in the cloud) allow the viewer to see their own shadow cast upon cloud. The effect is indeed spooky – with a giant grey shadow stretching from your feet into the atmosphere and in certain conditions it is accompanied by a circular rainbow which surrounds the shadow (known as a Glorie).

There are only a few spots in the Cairngorms where this phenomena can be seen with any certainty (and even then there is no guarantee) since it requires steep cliffs to give the elevation required to get above the cloud. One such place which often crops up in Big Grey Man stories is Lurchers Crag. These 1000ft cliffs stand guard over the northern entrance to the Larig Ghru (the main pass through the Cairngorms) and it is entirely possible that the Specter of Brocken has been seen in this area and interpreted as some other worldly presence. 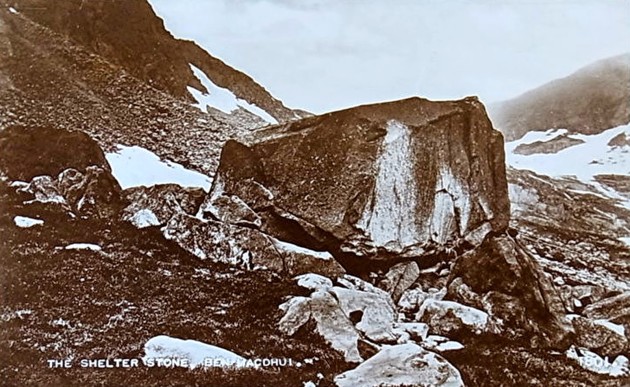 is the biggest mountain in the Cairngorms and the second highest in the UK. The summit rises from the southern part of a huge sub-arctic upland unique in the British Isles. It is a harsh environment where nothing grows save the hardiest of alpine plants. When the cloud rolls in summits can be shrouded for days, in winter the weak northern sun often does not penetrate the deep glens for weeks. At times like this the featureless plateau is at it’s most elemental – grey above and below, the perfect environment for a ‘Big Grey Man’.