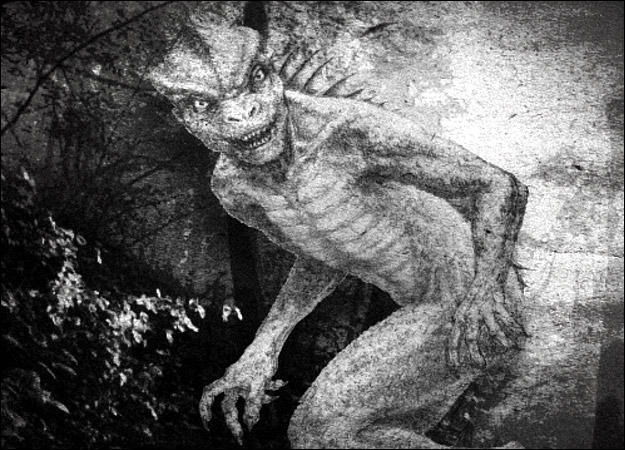 The Lizard Man of Scape Ore Swamp (also known as the Lizard Man of Lee County) is a reptilian humanoid cryptid which is said to inhabit areas of swampland in and around Lee County, South Carolina along with the sewers in towns near the swamp.

The first reported sighting of the horrifying lizard creature was made by Christopher Davis, a 17-year-old local, who said he encountered the creature while driving home from work at 2 AM on June 29, 1988.

According to his account, Davis stopped on a road bordering Scape Ore Swamp in order to change a tire which had blown out. When he was finishing up he reported having heard a thumping noise from behind him and having turned around to see a large 7 foot tall creature running towards him.

Davis said the creature tried to grab at the car and then jumped on its roof as he tried to escape, clinging on to it as Davis swerved from side to side in an effort to throw it off.

After he returned home, Davis’ side-view-mirror was found to be badly damaged, and scratch marks were found on the car’s roof, though there was no other physical evidence of his encounter.

Prior to Chris Davis coming forward to report his encounter, the Lee County Sheriff’s Office was called to the scene of a strange instance of vehicle damage. On the morning of July 14, 1988, deputies made their way to the residence, which was located in a small rural community known as Browntown on the outskirts of Bishopville, South Carolina.

When they arrived, homeowners Tom and Mary Waye showed them the vehicle in question. Police found that the chrome molding had been torn away from the fenders, the sidewalls were scratched and dented, the hood ornament was broken, the antenna was bent, and even some wires from the motor had been ripped out. Upon closer inspection, it appeared that parts of the molding had actually been chewed, as if an animal had used its teeth to inflict the damage.

The Sheriff reports on the monster

To further support the animal theory, the Wayes pointed out clumps of reddish colored hair and muddy footprints that had been left all over the car. While Sheriff Truesdale was investigating the car, locals informed him there might yet be another, more bizarre possibility.

“While we were there looking over this situation, we learned that people in the Browntown community had been seeing a strange creature about seven feet tall with red eyes,” Truesdale told us. “Some of them described it as green, but some of them as brown. They thought it might be responsible for what happened. 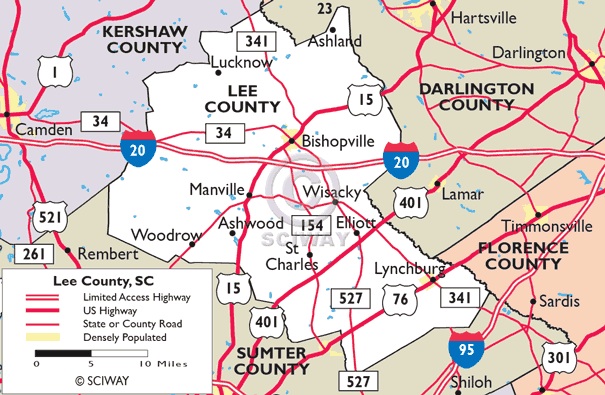 In the month that followed the Davis sighting there were several further reports of a large lizard like creature, and of unusual scratches and bite marks found on cars parked close to the swamp.

Most of these are said to have occurred within a 3-mile (5 km) radius of the swamps of Bishopville.

Two weeks after the Davis sighting, the sheriff’s department made several plaster casts of what appeared to be three-toed footprints – measuring some 14 inches (36 cm) in length – but decided against sending them on to the FBI for further analysis after biologists advised them that they were unclassifiable.

On July 30, 1990, Bertha Blythers and her five children witnessed a strange creature near Scape Ore Swamp as they drove home from a restaurant in Bishopville. At approximately 10:30 p.m., they crossed over the interstate and were nearing the intersection of Hickory Hill Road when suddenly a large figure appeared out of nowhere and lunged toward the passenger side of the car. In a statement given to the Lee County Sheriff’s Office, Bertha described the creature as being tall, wide, and having “two arms like a human.” She could only see it from the waist up, but there was no question that it was “big.” She was not able to make out any clear facial details in the short time it was in front of her, but she was quite sure the body was covered in brown hair. “I never seen anything like it before,” she told the police. “It wasn’t a deer or a bear. It was definitely not a person either

Return of the Lizard Man

In February 2008, a couple in Bishopville, South Carolina, Bob and Dixie Rawson, reported strange damage to their vehicle, traces of blood, and the disappearance of some of their cats. Based on how the damage looks, some have claimed that this is the “return” of the Lizard Man

In 2011, Bishopville, South Carolina residents, Leon and Ada Marshall, reported that their car had been mauled by some kind of animal. Former Lee County Sheriff stated that the damage on the car looks much like the damage from earlier incidents. Deputy Fletcher Williams inspected the car and surmised that teeth were responsible for the damage, as if the car had been “chewed up.”

To further suggest that an animal had been the vandal, a clear trail of saliva was visible from “the front passenger door across the front of the vehicle to the driver door” and on the discarded strips of bumper material. He also found long white and brown hairs.