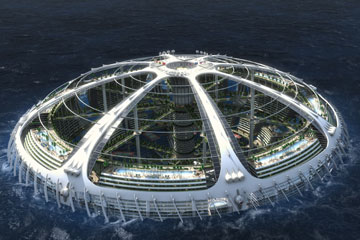 When will we live under the sea?

The ocean presented early humans with a vast mystery. What worlds and fabulous creatures exist in the deep? Today, our understanding has expanded, but the world’s waters still offer us an abundance of mystery and awe. We dream less about mermaid cities and sunken Atlantis and instead imagine underwater metropolises and seafloor colonies.
This zeal was especially strong in the late 1950s and early 1960s, when Jacques Cousteau’s Conshelf project and the United States Navy’s Sealab saw the dream of undersea living realized. Through three stages of field tests on the ocean floor, both programs proved that humans can live and work for extended periods of time underwater. The test subjects tended underwater gardens, tackled underwater construction projects and lived the life of an aquanaut.
Half a century later, the underwater cities still aren’t here. Sure, we have unrealized designs such as Giancarlo Zema’s semisubmerged Trilobis 65 dwelling and the proposed underwater Dubai skyscraper Hydropolis, but very few underwater habitats. The bottom line is that while humans can live underwater, it’s not an easy or cheap life. It’s also not necessary.